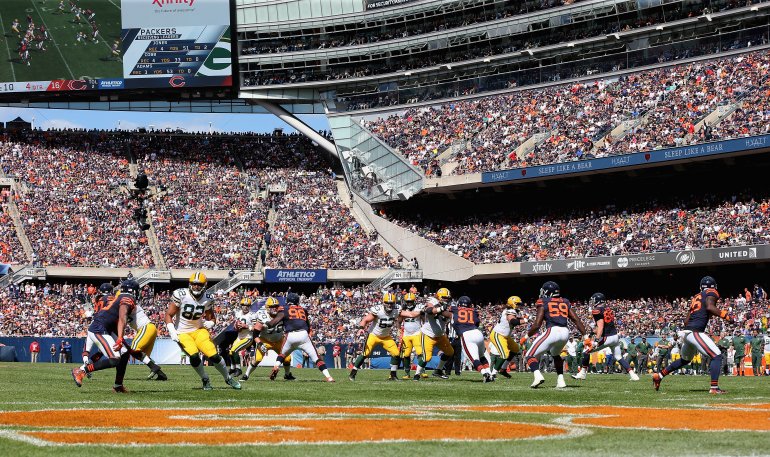 (CNN) — Cold temperatures are expected to blanket a large portion of the US this weekend, sending a lot of folks indoors.

But not everyone will be shielded from the elements.

For the NFL, games don’t stop because of extreme cold, and one rivalry game in particular has potential for some bone-chilling numbers for a team’s record books.

The Chicago Bears host the Green Bay Packers at Soldier Field, with kickoff scheduled at 1 p.m. ET (noon local time) on Sunday. The high in Chicago is expected to be a single digit, and it could be the coldest home game in Bears’ history.

On Thursday, the team practiced outside for about an hour as a rehearsal for Sunday’s weather.

“You try to get your mind right, just knowing that you’re going to be out in that cold, but there’s not too much physically you can really do,” Bears wide receiver Cameron Meredith said Thursday. “You’ve just got to go out there and man up and go play the game.”

Despite the conditions, don’t expect to see Bears linebacker Pernell McPhee wearing any layers over his pads on Sunday.

“I ain’t wearing sleeves,” McPhee said, according to ESPN. “As a defensive lineman, as a front-seven guy, as a guy who plays defense — I think it’s a sign of weakness. I ain’t wearing no sleeves. I don’t know about everybody else.

Bears head coach John Fox said Thursday he doesn’t think either team will be bothered by the cold, provided it’s not very windy. But he won’t be encouraging his players to wear short sleeves.

“I’ve told them that I think macho stuff is all great, but there comes a point where people might question your intelligence,” Fox said with a laugh.

These two division rivals have a history of playing some frigid games against each other. At Soldier Field on December 22, 2008, the temperature at kickoff was 2 degrees, the coldest home game in Bears’ history in terms of Fahrenheit.

If measuring by wind chill, the lowest at Soldier Field was -15 on December 18, 1983, also coming against the Packers; the high temperature that day was 3 degrees.

But that’s got nothing on the coldest game in NFL history. That would be the iconic “Ice Bowl” at Lambeau Field in Green Bay. It was -13 degrees (with a wind chill of -48) when the Packers hosted the Dallas Cowboys on December 31, 1967.

Other games that likely will be hit with frosty temps on Sunday include the Tennessee Titans at the Kansas City Chiefs, 1 p.m. ET (noon local); the Cleveland Browns at the Buffalo Bills, 1 p.m. ET; and the New England Patriots at the Denver Broncos, 4:25 p.m. ET (2:25 p.m. local).

In January, before the new stadium was opened, the Vikings hosted one of the coldest playoff games in NFL history, a loss to the Seattle Seahawks in the NFC wild card game. More than 50,000 turned out at TCF Bank Stadium for that game. The temperature at kickoff? A frosty -6, with a wind chill of -25.

Rain in the Thanksgiving forecast and more this weekend

A soggy pattern is going to continue across southeast Louisiana and southern Mississippi through most of the holiday weekend. We are starting off with fog in the area Thursday morning as a frontal boundary continues to be draped across the area.

Look for showers and a few storms to develop this afternoon. Most of the activity today will move fairly quickly and we will not see the locally heavy rain amounts that we did on Wednesday. Still though some heavy downpours are possible in the stronger cells.

VIDEO FORECAST — Stormy weather pattern on the way before much COLDER weather heads our way next week.

Heads up! Stormy weather pattern on the way before much COLDER weather heads our way next week.

Spotty/scattered thunderstorms again in the forecast Thanksgiving Day. Not a washout, but a good idea to keep the umbrella nearby...especially south of the lake.

Heads up! Stormy weather pattern on the way before much COLDER weather heads our way next week.

The Fence: Public Photography at the Lafitte Greenway