Tropical Storm Dorian is showing signs of strengthening as it moves west toward the Windward Islands. It is a relatively small and compact storm but does have a decent core and has been trying to develop an eyewall through the morning on Monday.

You also notice some of the banding that is giving it a more structured appearance along with some of the wispy clouds around the edge indicating high pressure aloft. Overall the storm is still fighting a good bit of dry air as it tries to strengthen. 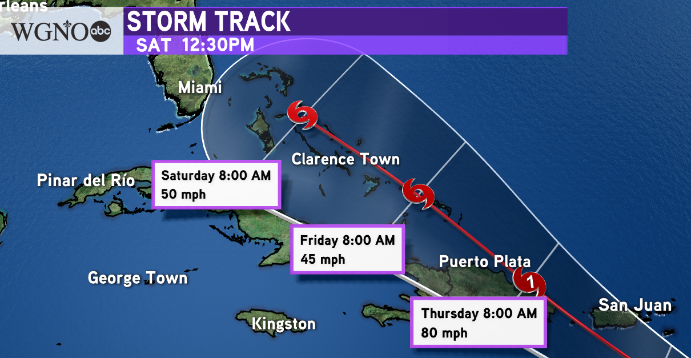 The current forecast takes Dorian northwest between Puerto Rico and Haiti. That will be the first thing to look for as a small shift over the island of Hispaniola would mean interaction with the very mountainous terrain there. As it stands right now the forecast takes Dorian to hurricane strength before weakening back to a depression near the Bahamas.

The forecast track right now indicates fairly good agreement from forecast models through the end of the week. After that there are bigger questions. Intensity will also play a role in the future track. A nudge to the west at the end of the weekend is possible and it’s not out of the question this moves into the Gulf.

Right now it is something to watch. Mostly likely anything entering the Gulf of Mexico would be weak but still contain a circulation. A stronger system may move up the east coast. This is something we will follow through the rest of the week. As always stay with WGNO for the latest on air and online.

Happy Mardi Gras! Weather cooperating for us as we go through the day for the most part.