Potential Tropical Cyclone 9 continues to show signs of organization Friday morning as it sits southeast of the Bahamas. This will most likely be a depression or a named storm, Humberto, by the end of the day.

Convection has become more centralized through the morning and you are starting to see signs of outflow around the edge of this area. Overall it has a much more organized look than Thursday.

Currently this is forecast to remain relatively weak as it moves up the east coast of Florida and just offshore. 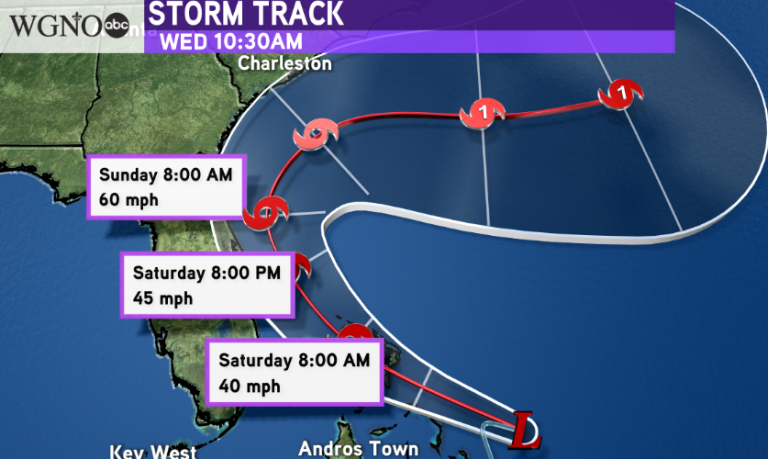 The latest forecast however does bring it through the northern Bahamas that were so heavily impacted by Dorian. While not a strong system at this point it is certainly more bad news for those areas.

Humberto is then forecast to become a hurricane after turning east away from the Georgia coast early next week. At that point it will likely head out into the Atlantic and not be a threat to anybody except perhaps Bermuda.

Overall this system is not going to be a threat to the Gulf of Mexico. There are two additional waves out in the Atlantic that will also need to be monitored through next week.

Mardi Gras may be over, but the good weather is still rolling according to Meteorologist Scot Pilié! Beautiful weekend on the way, but a strong storm system could head our way by the middle of next week!

Tonight, another chilly one for the first Friday of Lent! Fish Fry, Crawfish Boil, you name it...the forecast looks great tonight! Low temps in the upper 30s-near 40 north of the Lake. Low 40s on the southshore.

A really nice weekend of temperatures is on the way starting with Friday. We are looking at sunny conditions today and mid to upper 60s. A west breeze should warm temperatures up a few degrees more. Look for winds around 10-15.

One more chilly night with upper 30s to the north Saturday morning and then low 40s to the south.

Cold temperatures will be here to wrap up the week behind the cold front that moved through on Wednesday. A strong area of high pressure is moving into the southeast part of the country.

Look for temperatures in the mid 50s this afternoon. That will mean things are on the colder side. The good news is we will see plenty of sun and a lot less wind than yesterday.