A lot of talk has been going around about the potential for snow in the area late Monday night and Tuesday morning. Most of southeast Louisiana and southern Mississippi will not be seeing anything significant. However, northern Tangipahoa and Washington Parishes are under a winter weather advisory from 3 am until 9 am Tuesday morning. These areas could see up to an inch of snow, but a light dusting is more likely. There could also be some slick spots on the roadways so use extra caution if you’re out driving in the early morning hours. 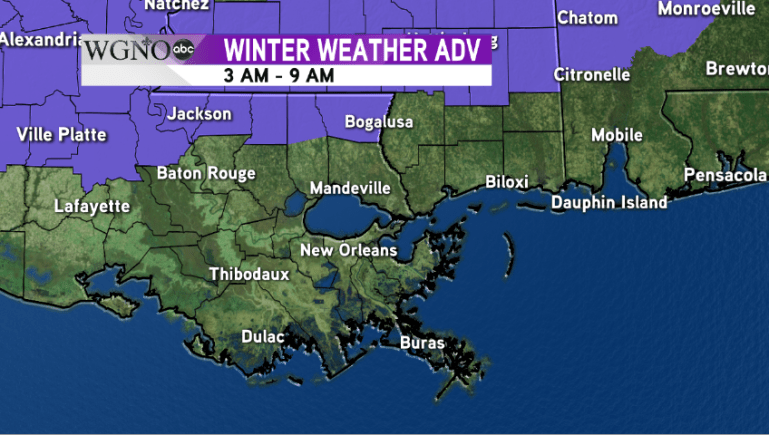 This is an unusual setup for winter weather in the south. Most of the time snow or ice occurs with cold air already in place and moisture moving in over top of that. This time around we have a cold front moving into the area with some rain lingering behind the front. If temperatures can cool quick enough before the precipitation ends the chance exists for a little snow or sleet. 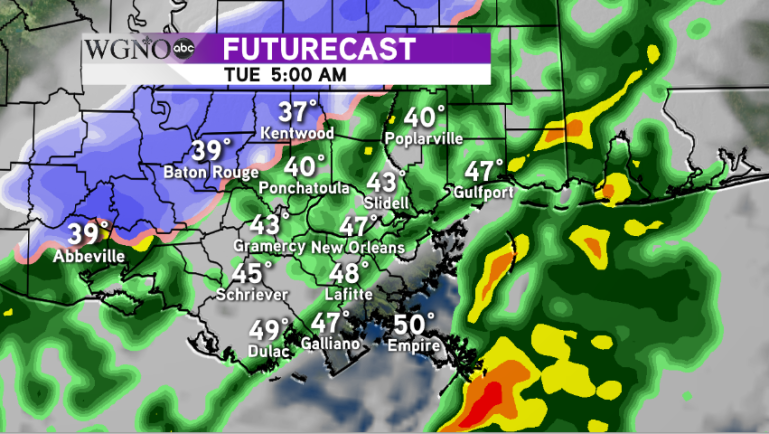 At 5:00 am Tuesday morning, the Futurecast shows a thin band of snow and ice on the northern side of the rainfall. This occurs as the cold air behind the front moves in. 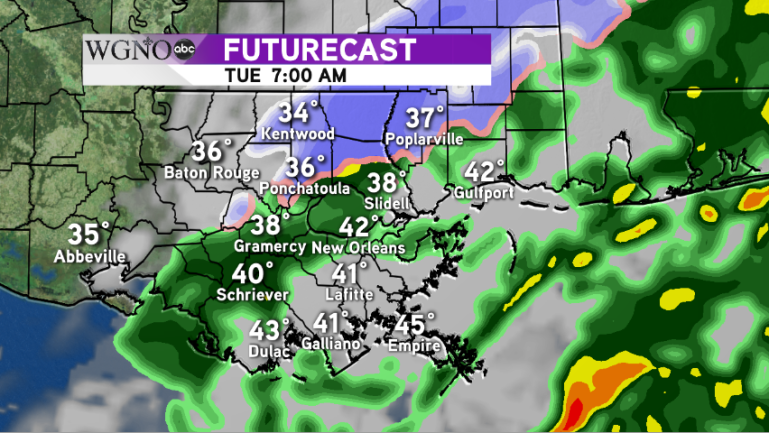 This band continues to move east and south over the next couple of hours with the cold air. Notice in both model images the temperatures stay above freezing. Due to the short time-frame of wintry weather and temperatures above freezing we are not expecting any issues on the roads outside of the advisory area. A light dusting of snow in the coldest spots on cars and roof tops will not be out of the question.

An earlier arrival of the cold air would mean a better accumulation potential, while any slowing of the cold will mean all rain in the area.

As always stay with WGNO through the day Monday and Tuesday morning for the latest updates.

VIDEO: Goats removed from SC’s ‘Goat Island’ ahead of Isaias

MURRELLS INLET, S.C. (WNCN) - The goats on a small island south of Myrtle Beach have been taken to a safe spot ahead of Tropical Storm Isaias' landfall later Monday.

The goats are put on the island in Murrells Inlet in order to keep the underbrush down, WMBF reports.

A hot and mostly dry forecast is on the way for the first full week of August. Look for just a spotty shower or two this afternoon, mainly on the eastern side of the area.

Overall rain chances will remain low as weak high pressure and drier air build in. This will give us plenty of sun and allow afternoon temps to get into the low to mid 90s over the next few days.

Tropical Storm Isaias is a little stronger with the pressure down from 998mb to 993mb. The storm is moving a little faster. Isaias has gotten better organized over the past 24 hours. Isaias continues to produce an area of vigorous Convection near and to the northeast of its low level center. Overnight radar has shown some mid-level eye feature. Some slight strengthening has occurred along with thunderstorm activity blowing up around its center. Hurricane hunters have found very little if any changes. As of 2 PM Monday, winds are at 70mph, making for a strong tropical storm. Pressure is at 993mb and movement around 13mph towards the north.

No mass shootings in the U.S. since the pandemic started — what about once it’s over?