NEW ORLEANS –  A powerful winter system is sweeping across the eastern half of the country and will bring a wintry mix to the North Shore and Coastal Mississippi during the overnight hours.

At this time, it looks like the majority of folks along the North Shore and Coastal Mississippi could see a dusting of snow. It appears a narrow band on the backside of the system could cause accumulations up to 2 inches. Determining where this band will set up has been the most difficult part of this forecast.

At the moment, it looks like folks just north of a line from Baton Rouge to Hammond to Bogalusa could see this additional snowfall. 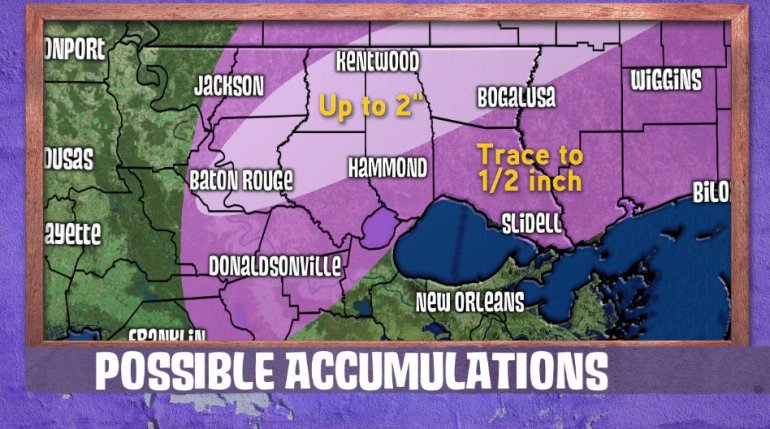 The rain could begin to turn into a wintry mix sometime after 8 p.m. this evening and eventually to all snow during the pre-dawn hours on Friday. By late Friday morning, the precipitation should depart the area and skies quickly clear out. Any accumulations will quickly melt.

For the most part, accumulations should be limited to elevated surfaces such as trees, power lines, bridges and overpasses. However, the roads may become slick in time for the morning commute so use extreme caution on bridges, especially the northern parts of the Causeway and Twin Spans.

At this time, it appears the South Shore will remain a cold rain with a few sleet pellets mixed in.