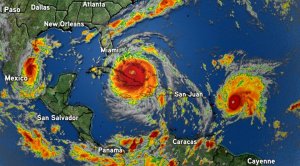 NEW ORLEANS — The 2017 hurricane season was forecast to be the busiest we have seen since 2010.

With the organization of Tropical Storm Ophelia, there have now been 15 named storms this season. Three Category 4 hurricanes — Harvey, Irma and Maria — made landfall in U.S. territories,and that has not ever happened on record!

Perhaps the most impressive statistic is that if Ophelia strengthens to a hurricane, which it is forecast to do, it will be the tenth consecutive hurricane. This has not happened in 124 years, or since 1893. The only caveat to that is there were if course no satellites back then, so smaller storms may have gone unnoticed.

Overall, the 2017 has been a landmark season, but fortunately beyond Ophelia, there are no storms in the immediate future. Hurricane Season does not officially end until November 30th.

Nearly 52 million people are at risk for severe weather Wednesday

(CNN) -- A clash of record-breaking heat in the South and more seasonable weather to the North will lead to severe storms across 16 states Wednesday, putting 52 million people at risk.

A slight risk -- level 2 of 5 -- stretches from Missouri to the Carolinas and from Iowa to Georgia. It also includes a part of Texas.

It is very muggy Wednesday morning and overall feeling like the middle of summer. Dewpoints are into the 70s which means quite a bit of moisture around the area.

Expect a hot one this afternoon. Look for the upper 80s across the area. Southwest winds will be in the 10-15 range through the day.

Rain chances will go up some this afternoon as we get some spotty showers that develop in the area. Moisture coming in around the western side of high pressure will be moving in.

Look for breezy conditions again with southwest winds 10-15. Temperatures will top out in the mid 80s this afternoon.