The heavy rainfall event across Louisiana in early March was one of historic proportion. The latest update from the National Weather Service shows the heaviest band of rain across the north-central part of the state with a secondary band of heavy rain across southeast Louisiana and southern Mississippi.

Nearly 27 inches of rain fell near Monroe. Locally on the north shore, the high mark was Mount Hermon in Washington Parish with 16 inches. Several other areas in Tangipahoa and Washington parishes along with Walthall County, Mississippi received 10 inches or more.

Most of the heavy rain in southeast Louisiana fell on Thursday night and Friday morning. This caused widespread street flooding and eventually river flooding later Friday into Saturday as water drained into area rivers.

Numerous roads were closed across the north shore parishes into Southern Mississippi due to flooding along the Tangipahoa, Tchefuncte, Bogue Falaya, Bogue Chitto, and Pearl Rivers. Water rescues were needed in areas like Hammond, Ponchatoula, and Bogalusa as water entered homes. 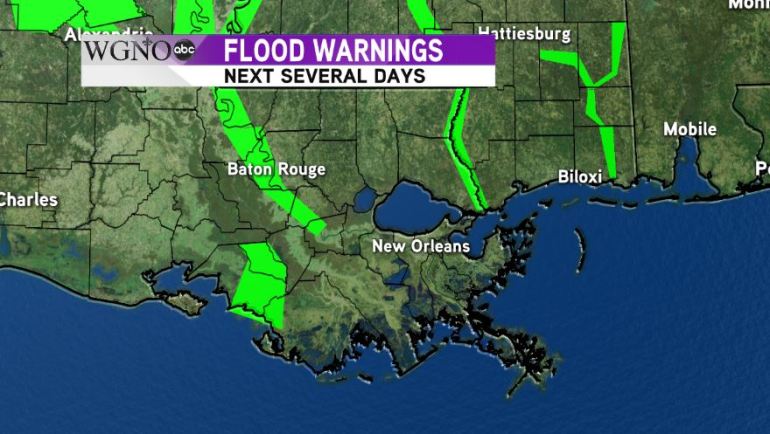 Flood warnings are still ongoing across parts of the area more than 10 days after the event. Specifically, the Pearl River remains above flood stage in many locations. Water levels are expected to remain near steady until late in the weekend as additional runoff from the rain continues to flow downstream from Mississippi.

However, additional rainfall over parts of the Easter weekend could slow this process. Levels also remain above flood stage for parts of the Mississippi and Atchafalaya rivers.

Remember never to try and drive through flooded roads.

Oil companies team up with Ducks Unlimited to protect …

10 common passwords and why to avoid them

La.’s Ft. Polk, 8 other bases, could be renamed

BR shooting victim was gunned down by girlfriend’s …