Tropical Storm Barry formed on Thursday morning after finally reaching enough organization and winds to be classified as a named storm. However on the satellite the storm is less than impressive. Northerly shear is pushing a lot of the activity further south of the center and the storm is having trouble organizing. It looks like that trend continues through at least Thursday. 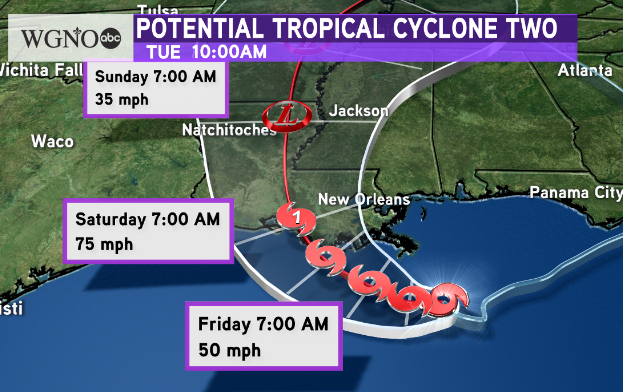 The official track from the National Hurricane Center has shifted east slightly as expected. There is still a large spread of the forecast models from east Texas to the MS coast. Right now the main thinking is a landfall point around southwestern Terrebonne Parish. While it is forecast to strengthen to a hurricane, this is not guaranteed and does not look to develop much beyond the cat 1 minimum. Impacts should be the same either way. 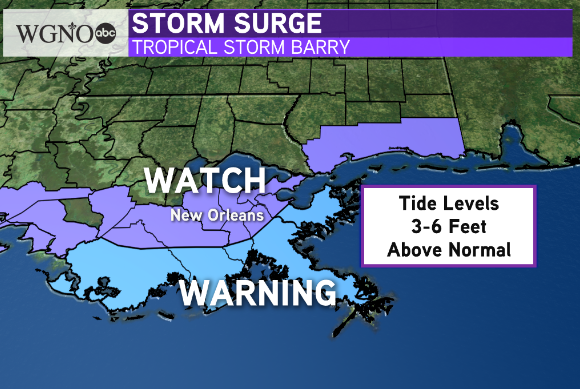 A storm surge warning has now been issues for southern coastal areas with the storm surge watch extended to south shore areas along with southern Mississippi counties. Any interests outside the levee system should move to higher ground. We could see tide levels 3-6 fee above normal which could be life-threatening for anybody in these areas. 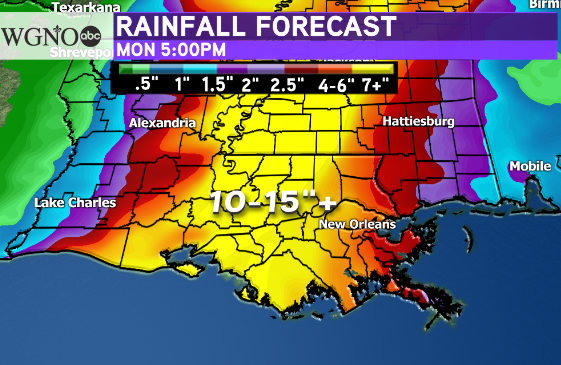 The biggest issue right now continues to be the potential for heavy rain. Most of this rain will be found near and just east of the center. Right now that looks to be New Orleans and areas west to Baton Rouge. This could be dangerous and life-threatening flooding. While most likely not for everybody, certain areas could see well over 10 inches of rain that produce flash flooding and river flooding. If you are in low lying areas it may be smart to move out of those areas ahead of the storm.

This forecast track would also mean the possibility of tornadoes in southeast Louisiana. Tropical Storm force winds are also possible but not a huge factor the way it looks right now.

Prepare now. Most of the significant weather will come Friday night through Saturday night.

Stay with WGNO for the latest.

Pockets of heavy rain in WGNO’s viewing area remain the themes all upcoming weekend through early next week as a pattern change begins.

Precipitation totals should be between 0.5-1.0″ through Monday with localized higher amounts possible.

Otherwise, temperatures plus increasing humidity work together to bring real feels up near triple digits.

VIDEO FORECAST from Meteorologist Scot Pilie -- One more day of low humidity for your Friday! This morning was the coolest temperature in New Orleans since June 15th.

More muggy and a gradual return to afternoon rain chances into the late weekend. Tropics remain asleep the next few days...enjoy it while it lasts!

Based off of dry air still dominating, southeast Louisiana stays hot with afternoon heat indices in the 98-106 range consistently.

Herman Cain is mourned, celebrated at his funeral in Atlanta

Caretaker arrested, charged with murder in death of Shreveport toddler