New Orleans — New Orleans boxer Regis Prograis has withdrawn from the World Boxing Super Series Tournament. Prograis and DiBella Entertainment, Inc. have also filed a civil complaint against Comosa AG, the corporation that created the WBSS Tournament. Here is the statement from Prograis and DBE they released Friday: 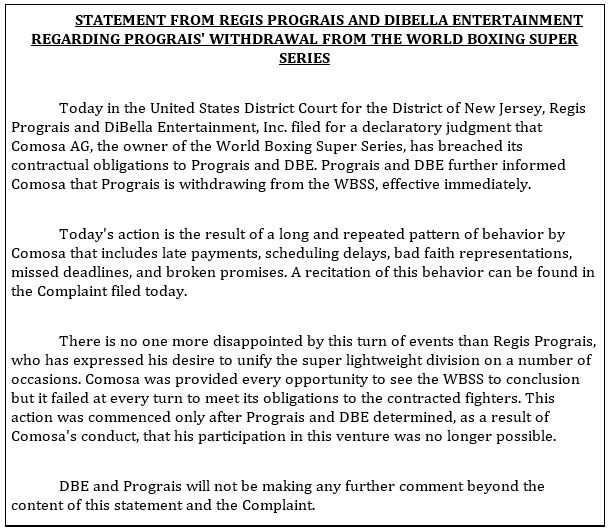 Prograis, the top seed in the WBSS super lightweight division, entered into the tournament in May 2018, and won both of his fights, setting-up the final bout against Josh Taylor at a date that had yet to be confirmed.

In a 20 page filing, Prograis’s representation cited “wrongful conduct and broken promises” as the nature of the litigation that they’ve initiated against the European sporting company.

According to the formal complaint Prograis and DBE filed, the WBSS paid his purse after his quarterfinal win over Terry Flanagan on October 27, 2018, but they were late in paying their winner’s bonuses. The document went-on to state that other boxers in the tournament did not receive their promised bonuses according to the timeline laid-out in their tournament agreement, which stated they were to be paid “within 5 days of the bout and receipt of an invoice.” Prograis did not receive his bonus from that fight until late November.

With the delayed payment and delayed scheduling, Prograis and his camp came-up with a new escrow agreement with Comosa to ensure a specific timeline for future payments and scheduling of fights. Those terms were met for the semifinal bout.

The other part of the new escrow agreement was that if Prograis advanced to the finals, “the parties shall enter in an escrow agreement on substantially similar terms as this agreement.” The timeline expected was a finals fight no later than October 7, 2019, the fighters would be given at least 8 weeks to prepare, and the payment timeline would be in three installments– 65, 54 and 31 days before the fight. The deadline to meet these parameters was August 3, 2019, by which nothing was finalized with the final bout between Prograis and Taylor.

Comosa suggested October 5, 2019 for the final, but the complaint stated “on information and belief, Comosa never had the October 5, 2019 date set with their US braodcaster DAZN.” A second proposed date was September 28, 2019, which would not abide by the agreement to give the fighters the 8 week period to prepare.

The latest delay in scheduling was the final straw for Prograis and his camp, which prompted the legal action against Comosa. As is stated in their complaint: “Comosa has Prograis trapped in a tournament whose delays and money problems have kept him and DBE from capitalizing on his status as one of the best boxers in the game.”

While Prograis was contractually committed to this tournament, he was not able to commit to any other fights. By filing the suit, he is asking to be released from his contract and obligations with the WBSS so he can pursue other fights.

The WBSS released a statement on Twitter Saturday morning in response to the suit filed against them:

In the statement, Comosa AG maintains that the litigation is “completely unfounded and without any basis in fact or in law.”

Collin and Baker: A Holy Cross assistant coach with a famous ex-teammate

Holy Cross assistant Coach Collin Lagasse takes a circuitous rout back to New Orleans from Texas. He was a high school football star in the Lone Star state, who claimed Baker Mayfield as a teammate.

The story from Friday Night Football presented by the Allstate Sugar Bowl.

During the live quarter of the scrimmage, Lakeshore got on the board first when Josh Ray ran up the middle for the first touchdown on the night.