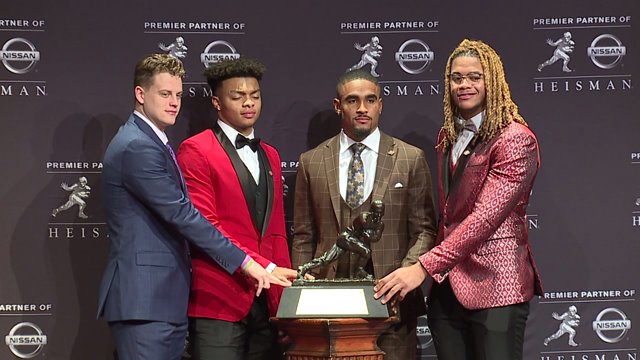 Sixty years after Billy Cannon won the Heisman, LSU finally has a repeat.

Quarterback Joe Burrow, a transfer from Ohio State was announced as the Heisman Trophy winner, Saturday night in New York.

Burrow was a record setter. He earned the highest margin of victory ever in the balloting, and the most first place votes ever. Burrow won by 1,846, shattering the previous mark held by OJ Simpson of 1,750 in 1968.

Burrow was the 85th recipient of the award.

An emotional Burrow, had to pause for a moment, and fight back tears, as he gave his acceptance speech.

“I want to thank my o-line,” said Burrow.

He mentioned by name his offensive line and skill players.

“They welcomed me with open arms, a kid from Ohio.”

To the previous Heisman winners.

“It is an honor to be on the same stage with you.”

“I am so thankful for LSU and Ohio State. My journey I wouldn’t trade it for anything in the world.”

“You have no idea what you mean to my family. Can you imagine a guy like coach O, giving me the keys? I hope they give him a lifetime contract, he deserves it.”

Here’s Karen Loftus at the Heisman Ceremony in New York.

Burrow has led LSU to a 13-0 record, and the number one seed in the College Football Playoff. LSU plays Oklahoma in the semifinals in Atlanta December 28th. Burrow has tossed 48 touchdown passes, tripling his number from a year ago. The 48 TD passes are a Southeastern Conference record.

Karen Loftus and Robert O'Shields of WGNO Sports are in New York.

No sleep on Bourbon Street. No nightcap like an LSU victory!

Look out below! Iguanas may fall from trees during Florida cold snap.

Rain with a few rumbles of thunder Precip: 90%

By a nano second LSU by 2 over FLA