NEW ORLEANS – Fifty years ago, about 30,000 hippies descended on Prairieville, Louisiana, for three days of peace, love, and music at the New Orleans Pop Festival. 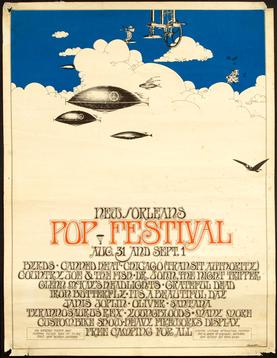 While not technically in New Orleans, the New Orleans Pop Festival drew quite a few national acts that had performed about two weeks earlier at Woodstock and helped inspire a generation of New Orleans musicians.

But local acts that were lesser known at the time were featured too, including Deacon John and his Electric Soul Train band.

While Deacon John is today known as an invariably dapper and straight laced performer, back in 1969, he says he was a full blown hippie.

Standing in the crowd that Labor Day weekend half a century ago was Dave Malone, who turned 17 on the second day of the festival.

Still years from forming the Radiators and carving out his own New Orleans music legacy, Malone was blown away by the way the assembled bands stretched out their songs into extended jam sessions, something he said he had never seen a rock band do.

While the New Orleans Pop Festival may have been largely forgotten over the past 50 years, it made a huge and lasting impact on both the performers and those lucky enough to attend.

Ed-itorial Podcast: All of Louisiana is under Phase Two, so what’s next for the NCAA

Send your news tips to WGNO & News with a Twist

Congrats (and a Wild Bill kiss) for Octavia Spencer: Oscar nominated for ‘The Shape of Water’