The first case happened on October 15 at 3:30 in the afternoon.  Police say a man was walking in the 1800 block of South Liberty Street. 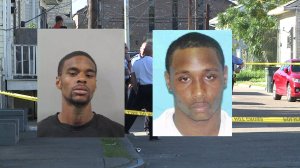 The second shooting case left a man dead.  It happened at about 12:30 Sunday afternoon in the 2000 block of Washington Avenue. 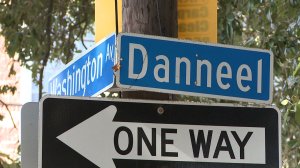 The coroner identifies the victim as 27-year-old Alfred Johnson.  They say he was found shot to death on the sidewalk.  Police have not released any information regarding a suspect  or motive in the attack.

And Monday's report ended with the search for a man who is accused of trying to kill his ex-girlfriend. 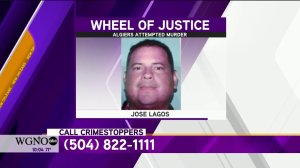 The NOPD says 39-year-old Jose Lagos stabbed a woman several times Monday morning at a parking lot in Algiers.  She survived but, at last word, is in the hospital undergoing treatment for stab wounds to her torso.

So far, more than 225 people have been arrested after their cases were featured on the Wheel of Justice on WGNO News at Ten.

NEW ORLEANS -- The New Orleans Police Department hopes you can help identify the people who stole a work truck in the city. The case is the latest one to roll on the Wheel of Justice.

The crime happened near the corner of Napoleon and Loyola avenues and was recorded by the dash camera of another work truck.

METAIRIE, LA -- The Jefferson Parish Sheriff's Office is trying to find anyone who can tell them what happened to Jenna Quesnel who arrived in the New Orleans area from Calcasieu Parish in the days following Hurricane Laura. The case is the latest one to roll on the Wheel of Justice.

According to deputies, on October 6, Quesnel's body was found inside of an empty warehouse in the 3100 block of West Napoleon Avenue. They say the woman had been dead for several days and the body was in a state of decomposition.

NEW ORLEANS -- The New Orleans Police Department is trying to identify and locate a pair of car thieves who targeted a pizza delivery driver. The case is the latest one to roll on the Wheel of Justice.

According to police, the crime happened on Sunday, September 27, at about 6:15 in the evening at the corner of Spanish Fort and Robert E. Lee boulevards.

McRib is back: McDonald’s fan-favorite available nationwide for first time since 2012

Dr. Fauci says COVID-19 vaccine won’t be available until January, warns U.S. is ‘not in a good place’ as cases spike

Second stimulus checks: Here’s why Pelosi is aiming for a deal right after Election Day

Ballot selfie laws: Is it legal to snap a photo in your state?

Second stimulus checks: Here’s why Pelosi is aiming for a deal right after Election Day

McRib is back: McDonald’s fan-favorite available nationwide for first time since 2012