MANDEVILLE, LA —  The Mandeville Police Department is looking for a man who is accused of wearing a Drew Brees Jersey while impersonating an officer.  The case is the latest one to roll on the Wheel of Justice. 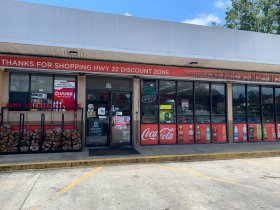 That’s when the man is accused of showing the workers a badge and claiming he was a Mandeville police officer.  Sticker says the man most certainly is not an officer with the department.

The man was wearing a Drew Brees jersey. We probably don’t have to tell you that he’s also not Brees.

Police say that the workers went inside to call the real police and the man left the scene.

Sticker says the man could face a list of charges including disturbing the peace, urinating in public, and impersonating a police officer.

One store worker told WGNO news that it is not uncommon to have people try to use the bathroom around the perimeter of the building. In this case, it appears that the man’s attempt to impersonate a police officer is what is going to really get him in trouble.

To see the latest Wheel of Justice report, click on the video button at the top of this page.

Mandeville police are asking anyone who can identify the man to call them at 985-624-3119.  So far, more than 400 people have landed behind bars after their cases rolled on the Wheel of Justice.

NEW ORLEANS -- The New Orleans Police Department is trying to find whoever stole an American flag from someone's home. Police say it happened on Thursday, February 4, at about 11:30 at night. The case is the latest one to roll on the Wheel of Justice.

The department posted a couple video clips from the homeowners' security cameras. Police did not reveal the address of the home.

NEW ORLEANS -- The New Orleans Police Department is trying to identify a pair of car thieves. The case is the latest one to roll on the Wheel of Justice.

Both thefts happened at the same convenience store in the 2000 block of Gentilly Boulevard, and both were recorded by security cameras.

Streetcar service suspended for mandatory maintenance. How to get around town if you take the streetcar for transportation.

‘Management based on vengeance’: US states look to step up wolf kills, pushed by Republicans

Streetcar service suspended for mandatory maintenance. How to get around town if you take the streetcar for transportation.