NEW ORLEANS — The New Orleans Police Department is trying to identify and arrest a man who attacked a couple in the French Quarter.  The case is the latest one to roll on the Wheel of Justice.

According to police, the attack happened on Friday, February 8, at about 2:30 in the morning.  Police say a couple was walking in the 400 block of Dauphine Street when they were approached by a man with a machete.

Police say the robber demanded the man’s wallet.  Police say the confrontation was followed by a chase and then a fight.  During the altercation, the robber seriously cut the left hand of the male victim.

According to police, after the man was injured, he hand over the wallet and the robber left the scene.  Police say the suspect headed toward the 900 block of Saint Louis Street where he got into a black Lincoln SUV mane made his escape toward North Rampart Street.

To see the latest Wheel of Justice report, including images of the suspect that were taken from security cameras, click on the video button at the top of this page.

If you can help police identify or arrest the man, call CrimeStoppers.  You don’t have to reveal your name or testify in court, and you could be eligible for a cash reward. 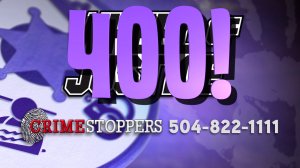