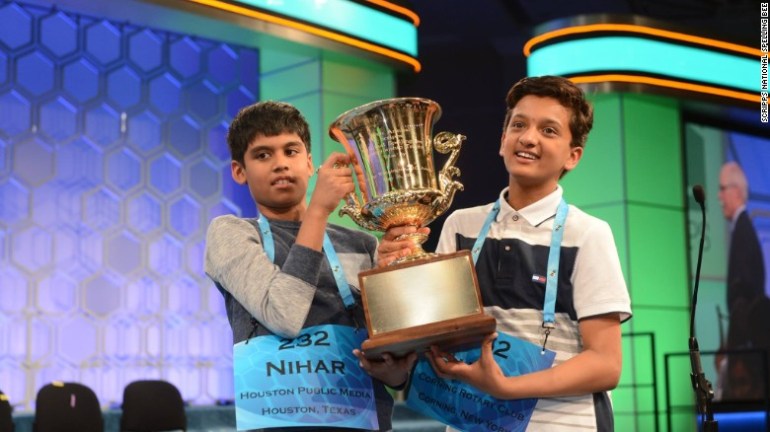 (CNN) — An Internet troll found out the hard way that the kids on stage aren’t the only people who can spell at the Scripps National Spelling Bee.

During Thursday’s competition, a Twitter user criticized the spelling bee for having a “comfort couch” for competitors to calm down after they were eliminated.

“Unsure of why the national spelling bee has a “comfort couch” you [expletive] lost suck it up quit teaching kids it’s okay to loose [sic].”

It’s a mean way to talk about elementary and middle school students, who have to be 15 or younger to compete, but that’s not the only problem with this tweet.

The eagle-eyed folks who run the National Spelling Bee’s Twitter account corrected the author’s spelling in a one word reply: “lose.”

Keep in mind, Nihar Janga, 11, and Jairam Hathwar, 13, had to spell the words “gesellschaft” and “Feldenkrais” to win the competition.

The @ScrippsBee account joked back and forth with viewers throughout the event, but most of the interactions were much more lighthearted.

The moral of the story: Taking on the Scripps National Spelling Bee on Twitter is a loosing, or rather a losing, proposition.

SACRAMENTO, Calif. (KTXL) — A California mother gave birth inside a parking garage at UC Davis Medical Center on St. Patrick’s Day with the help of an off-duty nurse from another hospital.

Madison Fritter was ready to welcome her second baby into the world — just not two weeks early and not in any place other than a hospital bed.

TAMPA (WFLA) — The rainy weather forced a lot of people inside over the weekend, and some reptiles, too.

A baby alligator wandered into the Wesley Chapel kitchen of Erika Venza before noon Sunday. She called her friend and neighbor Sazan Powers to come over and help coerce the 1-foot gator out again.

ALTON, Ill. (KTVI) — A mysterious 19-century tunnel has been found underground on an Illinois resident's property.

“A lot of brick,” said Gary Machens, who discovered the tunnel. “Whatever they built this for, it took a lot of men and a lot of hours. You know, one guy didn’t do this.”