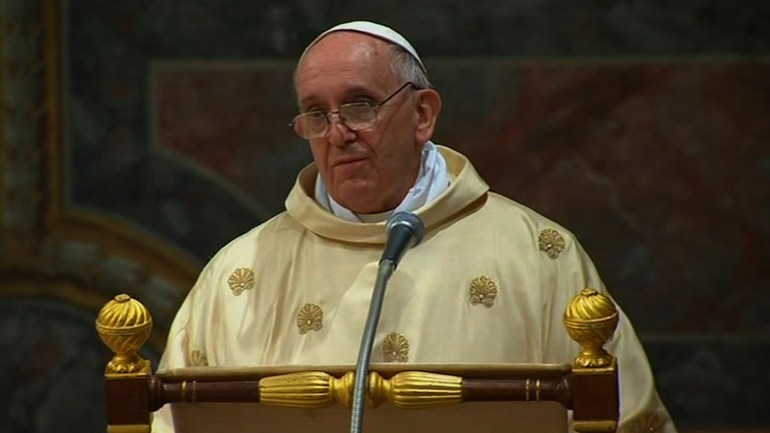 ROME (CNN) – Using strikingly open language, a new Vatican report says the church should welcome and appreciate gays, and offers a solution for divorced and remarried Catholics who want to receive Communion.

At a press conference Monday to present the report, Cardinal Tagle of the Philippines said the most discussed topics thus far at two-week long meeting of Catholic bishops and priests were the impact of poverty, war and immigration on families.

But one veteran Vatican journalist called the newly proposed language on gays and civil marriages a “pastoral earthquake.”

“Regarding homosexuals, it went so far as to pose the question whether the church could accept and value their sexual orientation without compromising Catholic doctrine,” said John Thavis, a former Rome bureau chief for Catholic News Service.

The Rev. James Martin, an author and Jesuit priest, called the report’s language on gays and lesbians “revolutionary.”

“This is a stunning change in the way that the Catholic Church speaks about gay people.”

The Catholic Catechism calls homosexual acts “intrinsically disordered” and calls on gays and lesbians to live in chastity. But Pope Francis, while hewing toward Catholic teaching, has signaled a gentler tone, famously saying in 2013 “Who am I to judge?” gays and lesbians.

Meanwhile, the synod report is a summary of a week of closed-door discussions of nearly 200 bishops, cardinals and priests, together with Pope Francis, on the topic of the family. The discussions continue this week in small language groups and a final report will be issued at the end of the week.

The goal of this meeting, officially called the Extraordinary  Synod of Bishops on the Family, is to present working proposals for a larger meeting to be held next October 2015. Here’s a summary of where the church may be heading on hot-button issues.

On the hotly debated question of Communion for divorced and remarried Catholics, the synod’s report offers a solution of the “penitential path” or a period of reflection and penance which would allow the partners in a second marriage to receive communion.

This solution, it says, must not be a “general possibility” but one which could be applied in certain cases. It would be up to the local bishop to make the decision.

The document states that this was only one possible solution and that the problem requires further study.

“The speeding up of the procedure” of granting annulments was requested by many, according to the report. Various ways to make annulments “more accessible and flexible” were suggested by the Synod.

Citing economic factors which sometimes contribute to the decision not to have children, the synod nonetheless states that “being open to life is an intrinsic requirement of married love.”

However it notes that, there are examples of good gay relationships “in which mutual aid to the point of sacrifice constitutes a precious support in the life of partners.”

The report states that “homosexuals have gifts and qualities to offer the Christian community,” and asks if the Catholic Church is “capable of welcoming these people … accepting and valuing their sexual orientation … ?”

“Furthermore, the church pays special attention to the children who live with couples of the same-sex, emphasizing that the needs and rights of the little ones must always be given priority.”

Finally, the report laments any outside pressure from “international bodies” that make “regulations inspired by gender ideology” a prerequisite of financial aid.

The synod discussions emphasized the “positive reality” of civil weddings and cohabitation which, while not the ideal of Christian marriage, nonetheless contain “constructive elements.”

Many couples who choose to live together, according to the synod, do so for economic reasons.

“Simple cohabitation is often a choice inspired by a general attitude, which is opposed to institutions and definitive undertakings, but also while waiting for a secure existence (a steady job and income).”

In these cases, the synod says, “The church is called on to be the house of the Fathers, with doors always wide open…where there is a place for everyone, with all their problems.”

Bayou Boogaloo 2022 is back with a new brass barge …

St. John the Baptist Parish deputy is making a difference

Kennedy explains his vote to send aid to Ukraine