“The Coast Guard is continuing to receive upwards of 1,000 calls per hour,” US Coast Guard Lt. Mike Hart said Monday. “Today alone, the Coast Guard has rescued over 3,000 people. That includes both air rescues and rescues using boats.”

Since midnight Sunday, more than 2,300 calls have poured in to the Houston Fire Department, including 400 calls for rescue Monday afternoon, Houston officials said.

As Harvey dumped rain on East Texas and the waters rose, people started to panic, rushing rescue boats and even shooting at them if they didn’t stop, said one volunteer rescuer.

Clyde Cain, of the Cajun Navy, a Louisiana-based rescue force that gained fame during Hurricane Katrina, said in one instance, a boat broke down, and while the crew sought shelter in a delivery truck, people tried to steal the inoperable boat.

“They’re making it difficult for us to rescue them,” he said. “You have people rushing the boat. Everyone wants to get in at the same time. They’re panicking. Water is rising.”

Because of the hostile responses, the Cajun Navy has been forced to halt some rescue attempts, Cain said.

“We have boats being shot at if we’re not picking everybody up. We’re having to pull out for a minute. We’re dropping an airboat right now to go rescue a couple of our boats that broke, and they’re kind of under attack,” he said.

There is no indication the water will stop rising anytime soon. Swollen rivers in east Texas aren’t expected to crest until later this week, and federal officials are already predicting the deadly Tropical Storm Harvey will drive 30,000 people into shelters and spur 450,000 victims to seek some sort of disaster assistance.

And yet, forecasters say, more rain is coming. Lots more.

President Trump said Monday the recovery from Hurricane Harvey will be “a long and difficult road,” but predicted the country would emerge “bigger, better, stronger than ever before.” Trump is scheduled to visit Texas on Tuesday.

Calling the storm a catastrophe in Southeast Texas, the President said, “We see neighbor helping neighbor, friend helping friend and stranger helping stranger. We are one American family. We hurt together, we struggle together and believe me, we endure together.”

The President also said he believes Congress will act fast to provide disaster relief funding to the areas affected by Harvey.

Addressing Texans, he added: “We’re going to get your funding.”

— About 8,000 people were estimated to be in Houston shelters Monday night, said Houston’s mayor. About 5,000 were expected to be in the Houston Convention Center, he said.

— The Galveston County Office of Emergency Management on Monday issued a mandatory evacuation order for Dickinson, Texas, according to spokeswoman Brittany Viegas. Dickinson is about 172 miles northeast of coastal Rockport. A dramatic photo circulating on the Internet showed residents of an assisted living facility in Dickinson being rescued on Sunday.

— Harris County has had “six suspected flood-related deaths” since Harvey made landfall last week, said Tricia Bentley, spokeswoman for the Harris County Institute of Forensic Sciences. The manners of death will be confirmed this week, she said. One confirmed storm-related death was a man killed in a fire in Rockport over the weekend. 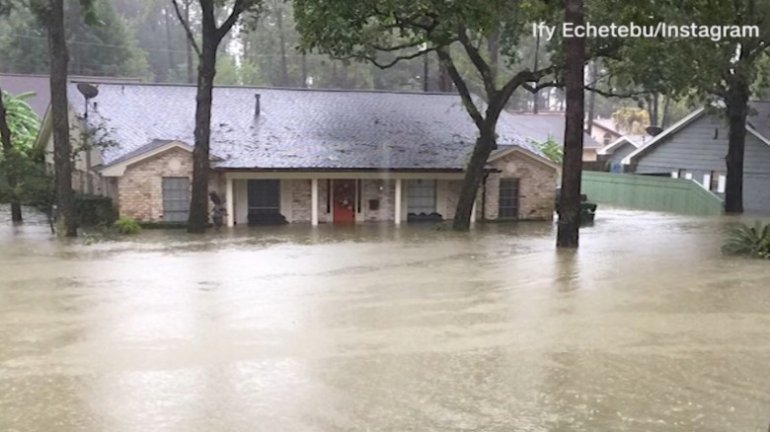 — The average annual rainfall in Houston is 50 inches. The city has seen 25 inches of rain in two days. Another 25 could fall by Saturday.

— The Houston Independent School District has canceled school for the week for the district’s 215,000 students.

— President Trump approved Louisiana Gov. John Bel Edwards‘ request for an emergency declaration. The governor said in his request that he believes Beauregard, Calcasieu, Cameron, Jefferson Davis and Vermilion parishes will face the brunt of Harvey’s winds and rain. The President said he will also visit Louisiana on Saturday.

— Energy provider CenterPoint says 96% of its Houston customers have power, but more than 104,000 are without electricity as crews experience difficulty reaching affected areas.

— The NFL said the Houston Texans’ preseason game against the Dallas Cowboys, scheduled for Thursday in Houston, has been moved to the Cowboys’ home stadium in Arlington, Texas. The MLB’s Astros and the University of Houston and University of Texas football teams — as well as Louisiana State University, which has a game scheduled Saturday in Houston — all have practices or games this week and were monitoring the storm before deciding if they will play.

Several locales have received 2 feet or more of rain, and forecasters say a reprieve won’t arrive until week’s end at the earliest. By then, rain totals could reach another 2 feet — with isolated instances of 40 to 50 more inches — along the upper Texas coast.

“This is a landmark event for Texas,” FEMA Administrator Brock Long said. “Texas has never seen an event like this.”

Long said earlier that FEMA will likely be in Texas for years, and that Harvey will require one of the largest recovery housing efforts the nation has ever seen.

Harvey will likely surpass 2008’s Hurricane Ike and 2001’s Tropical Storm Allison, two of the most destructive storms to hit the Gulf Coast in recent memory, he said. Millions of people from Corpus Christi to New Orleans were under flood watches and warnings Monday as Harvey’s storm bands repeatedly pummeled the same areas.

For state and federal officials working to mitigate Harvey’s devastation, one of the more frustrating aspects of the storm is uncertainty.

“The word catastrophic does not appropriately describe what we’re facing,” said US Rep. Sheila Jackson Lee, D-Texas. “We just don’t know when it’s going to end.”

Early Monday, Harvey was barely clinging to tropical storm status, but the danger is far from over. The storm is forecast to head southeast toward the Matagorda Bay and Gulf of Mexico, where it will pick up additional moisture before sliding back over Galveston and Houston, cities it has already hammered.

The slow-moving nature of the storm — it has traveled about 3 mph, human walking speed, since Friday’s landfall — has fueled the rain and flooding. Houston’s William P. Hobby Airport recorded more than a foot of rain Saturday and 11 inches of rain Sunday, the two wettest days recorded since 1930.

Even when the rain is gone, dangers will persist, said National Weather Service Director Louis Uccellini, because “the flooding will be very slow to recede.”

Citizens with boats assisted authorities in search and rescue efforts on Sunday, and at a Monday news conference, Long encouraged more citizens to come forward, saying the recovery efforts would require community involvement. He said the National Voluntary Organizations Active in Disaster website would direct folks to religious and nongovernmental agencies through which residents can help victims, who, so far, span 30 to 50 counties.

“Donate your money. Figure out how you can get involved as we help Texas find a new normal.” said Long, who was scheduled to arrive Monday in Corpus Christi.

One citizen answering the call is Jim McIngvale, who owns furniture stores in Houston and Richmond. He opened his doors to evacuees on Sunday and provided 600 people a place to sleep.

“We have tons of mattresses in our warehouse and we can provide them with a blanket,” he told CNN. “We have a restaurant inside the stores, and we are and we are feeding them for free.”

Aaron Mitchell of Aransas Pass, appeared shell-shocked as he recounted riding out the storm in his mobile home, which he said “felt like ‘The Wizard of Oz,’ man.” He had walked 12 miles to find his father in Rockport, to no avail.

Though he has no intention of leaving the place he calls home, he second-guessed his decision not to evacuate, he said.

“I just lost everything I worked for. Everything,” he said. “I don’t know. Maybe I should’ve left.”

(After his interview, Mitchell reached his father via telephone and, in tears, told him, “OK, Dad, I’m going to jump on a bus. I’ll be there.”)

“Our bottom level is waist-deep in water,” she said. “We have people who are living in these first-floor apartments, like I have. They have been breaking into empty second-level apartments just to have somewhere to go,” she said.

State, local and military rescue units have plucked thousands of stranded residents from the water and deluged homes. “None of us (is) going to give up,” Houston Police Chief Art Acevedo said, reassuring residents.

In Harris County, authorities asked stranded people to hang sheets or towels from their residences, so rescuers could spot them more easily.

The Pentagon is also identifying resources, including trucks, aircraft and troops, that can be dispatched for hurricane relief if the request comes, defense officials said, and Gov. Abbott has activated the entire Texas National Guard, roughly 12,000 Guardsmen, he said Monday.

“The rationale is it is better to start with controlled releases using the outlet structures than to allow uncontrolled release to go over the edge of the dam. So we have more capability to control the downstream effects,” said Edmond Russo with the US Army Corps of Engineers.

In Conroe, an hour’s drive north of Houston, record levels of water are also being released from Lake Conroe Dam. The city will be evacuating some neighborhoods as a result.

Residents living along the Brazos River in Fort Bend County were ordered to evacuate after the National Weather Service predicted river levels of 56.1 feet, nearly 2 feet above the record during flooding last year.

South of Houston, in Brazoria County, officials set up an evacuation route for at-risk residents, ordering them to “LEAVE NOW!” Those in need of shelter can take refuge in the Bell County Expo Center in Belton, officials said.

The state of roads — particularly interstates 10, 45 and 610 in Houston — left many residents stranded. Much of that is due to flooding from the White Oak Bayou, which rose more than 20 feet in four hours Sunday.

CORRECTION: An earlier version of this story incorrectly identified the Dallas mayor. He is Mike Rawlings.

CORRECTION: An earlier version of this story incorrectly reported that the Addicks and Barker dams are in Galveston. They are in west Houston.

This story has been updated to clarify the number of confirmed and unconfirmed deaths attributed to the storm.

NEW ORLEANS — The NOPD is investigating a shooting at the intersection of St. Ann & N. Prieur streets.

NEW ORLEANS — New Orleans may have held back on Governor John Bel Edwards' decision to move Louisiana into Phase 3, but a crowded French Quarter on Saturday night proved just as threatening as COVID-19 with reports of a shooting on one of the world's most (in)famous streets.

The New Orleans Police Department is currently investigating a double shooting that occurred shortly before 11 p.m. in the 500 block of Bourbon Street.

MYSTERY WIRE — The world’s largest UFO religion is waiting for the return of humanity’s creators, a race of extraterrestrials called the Elohim.

The Raëlians call themselves an organization, but are often referred to as a cult, or even a space alien cult. According to the president of the North American Raëlians there are around 130,000 members in more than 80 countries. The Raëlians are now the subject of the new documentary on VICE called The Prophet and the Space Aliens.