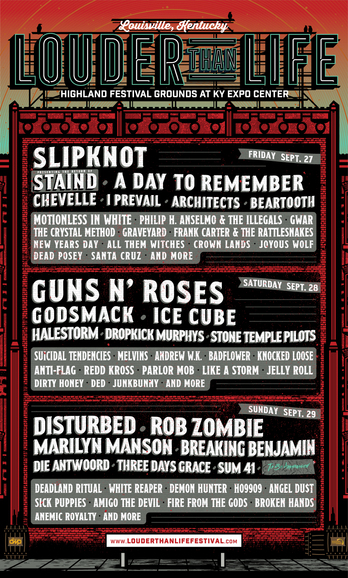 Louder Than Life, the World’s Largest Rock ‘N’ Roll Whiskey Festival, returns to Louisville, KY even bigger and better in its fifth year, with festival producers delivering the most spectacular music lineup since the festival began in 2014. Louder Than Life will feature quintessential rock band Guns N’ Roses, the return of chart-topping, festival favorites Slipknot and Disturbed, a reunited Staind (in their first public performance in 5 years), Godsmack, Rob Zombie, A Day To Remember, Ice Cube, Marilyn Manson, Breaking Benjamin, Chevelle, Halestorm, and many more.

Louder Than Life will be held at Highland Festival Grounds at KY Expo Center on Friday, September 27 through Sunday, September 29. This festival will feature more than 50 music acts, with performances on three stages, along with award-winning bourbons, whiskey, spirits, craft beer, and the best food Louisville has to offer.

NEW ORLEANS - Since December 14th, 2020, Ochsner Health confirmed, their organization has vaccinated more than 67,000 people including community physicians, Oschner employees, and those who were age 30 and up. However, last week Ochsner wasn’t given more doses of the vaccine causing scheduled appointments to be put on hold. However, University Medical Center has not reported a shortage of the vaccination.

“UMC as a hospital, continues to have vaccines for this week and so we have schedules built out at all of our LCMC hospitals,” LCMC Health Medical Director for Emergency Management, Jeffrey Elder said. “This is a week-by-week allocation that we get from the Federal Government through the Louisiana Department of Health so we are watching our schedules closely.”

Geaux Nation's Jared Joseph brings viewers a live report from the Pete Maravich Assembly Center, where LSU fans are lining up to get inside before LSU's game on Tuesday vs Alabama.

The changes, approved during Tuesday’s Board of Elementary and Secondary Education meeting, enable more Louisiana families to afford and qualify for child care assistance.