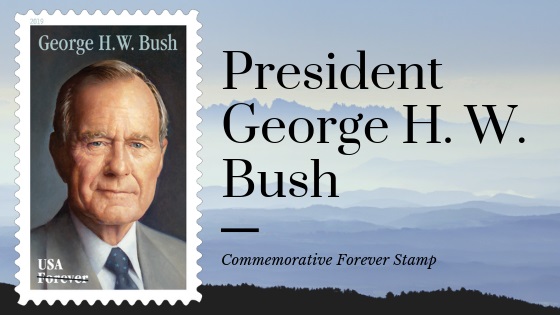 The U.S. Postal Service rarely makes announcements on Saturdays, but an exception was made on April 6.

The stamp art is a portrait of Bush painted by award-winning artist Michael J. Deas, based on a 1997 photograph taken by Timothy Greenfield-Sanders. Phil Jordan was the art director and stamp designer.

The “Forever” stamp will always be valued at the first-class 1-ounce letter rate, currently 55¢.

During his term in office, he guided the U.S. and its allies to a peaceful end of the Cold War, helped reunify Germany, and led a multinational coalition that successfully forced Iraq to withdraw from Kuwait during the Persian Gulf War.

George Bush also called and inspired millions of Americans to serve their communities with his vision of a nation of volunteers as “a brilliant diversity spread like stars, like a thousand points of light in a broad and peaceful sky.”

As has become customary, the first-day-of-issue ceremony will be held on the president’s birthday, June 12, at the George H.W. Bush Presidential Library and Museum in College Station, Texas. U.S. Postal Service Board of Governors Chairman Robert M. Duncan will serve as the dedicating official.

The stamp is available for pre-order for delivery on or after the June 12 ceremony at usps.com/stamps.

DeBartolo Jr., who built the San Francisco 49ers' 1980s-'90s dynasty, was involved in one of the biggest owners' scandals in the sport's history. In 1998, he pleaded guilty to failing to report a felony when he paid $400,000 to former Louisiana Gov. Edwin Edwards in exchange for a riverboat gambling license.

A 6-year-old girl is recovering from minor injuries after an animal suspected to be a mountain lion attacked her at a California park. Wildlife officials are now searching for the animal.

The attack happened Sunday morning when a group that included the girl, her parents and several other adults and children were hiking on a trail at the Rancho San Antonio County Park in Santa Clara County.