President Trump appeared to show an altered map of Hurricane Dorian’s trajectory in the Oval Office that added the state of Alabama to the storm’s projected path.

Trump’s apparently altered map appears to be based on a projection map issued by the National Weather Service on August 28 that did not include Alabama:

At 8 pm Hurricane Dorian was located 60 mi NNW of San Juan Puerto Rico moving to the NW @ 13 mph with max winds of 80 mph. Gradual strengthening is expected the next few days as Dorian continues to track to the NW over the Atlantic well east of the southeast & central Bahamas. pic.twitter.com/aDqrJDEf0g 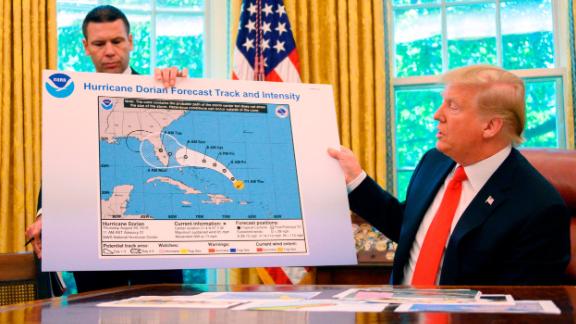 On September 1, the president tweeted that the storm was forecast to hit Alabama, a false claim that was quickly refuted by the National Weather Service:

In addition to Florida – South Carolina, North Carolina, Georgia, and Alabama, will most likely be hit (much) harder than anticipated. Looking like one of the largest hurricanes ever. Already category 5. BE CAREFUL! GOD BLESS EVERYONE!

Alabama will NOT see any impacts from #Dorian. We repeat, no impacts from Hurricane #Dorian will be felt across Alabama. The system will remain too far east. #alwx

CNN has reached out to the White House for comment and has not heard back.

(NEXSTAR) – Season 2 of ‘The Mandalorian’ is rapidly approaching on Disney+, and a new trailer appeared during Monday Night Football.

The new scenes focus on the Mandalorian’s search for The Child’s (aka Baby Yoda) own kind.

Poachers set as many as 10,000 squirrel traps in central Florida and captured as many as 3,600 flying squirrels over a three-year period. They sold the squirrels to a licensed wildlife dealer who claimed they were bred in captivity and not wild, the Florida Fish and Wildlife Conservation Commission said in a press release. Flying squirrels are a protected species.

Stream and scream! Here are the horror movies you can watch right now

AUSTIN (KXAN) -- Spooky season is halfway over, but there's still time to get your chills before October ends. Here's a list of the horror movies currently available for streaming.

Rapper accused of fraudulently getting $1.2M in jobless benefits after boastful music video

‘Glitter bomb’ sent to employee of 911 center in Pennsylvania

Stream and scream! Here are the horror movies you can watch right now

How Trump plowed through $1 billion, losing his cash advantage

Can’t find your favorite soda at the store? Here’s why

Rapper accused of fraudulently getting $1.2M in jobless benefits after boastful music video

‘Glitter bomb’ sent to employee of 911 center in Pennsylvania