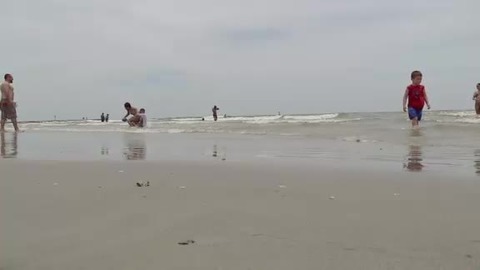 KYLE, Texas – A second man has contracted a flesh-eating bacteria after swimming in the Gulf of Mexico.

42-year-old Adrian Ruiz spent Father’s Day weekend at Port Aransas, Texas. Within 24 hours, of the beach trip he came down with a fever and a red rash began to climb his right leg.

The doctor told Ruiz and his wife that a flesh-eating bacteria was reported earlier in Galveston, but he didn’t want to alarm them, Lashelle Ruiz told KXAN.

A day later Ruiz got much worse.

“I’m fearful for him possibly losing his leg; I don’t want to think that that is going to happen, and I have told him that. We are going to be positive,” Lashelle Ruiz said.

Another Texas man, 50-year-old Brian Parrott, became ill on June 12 after being at a Galveston beach. He was rushed to the hospital two days later for emergency surgery to remove his right leg just below the knee.

The flesh-eating bacteria is called Vibrio vulnificus. It naturally lives in brackish or salt water and is more common during the summer months.

People can get infected if they go swimming with an open cut or wound.

OAKLAND, Calif. (AP) — Police in a small San Francisco Bay Area community were about to help authorities in neighboring Oakland keep the peace during a protest when a more pressing crisis hit home: groups of thieves had pillaged malls, set fire to a Walmart and stormed a car dealership.

By the time San Leandro officers arrived at the Dodge dealership, dozens of cars were gone and thieves were peeling out of the lot in $100,000 Challenger Hellcat muscle cars.

WASHINGTON (AP) — Former President Barack Obama is taking on an increasingly public role as the nation confronts a confluence of historic crises that has exposed deep racial and socioeconomic inequalities in America and reshaped the November election.

In doing so, Obama is signaling a willingness to sharply critique his successor, President Donald Trump, and fill what many Democrats see as a national leadership void. On Wednesday, he held a virtual town hall event with young people to discuss policing and the civil unrest that has followed the death of George Floyd in Minneapolis.

PHOENIX (AP) — More than 10,000 people have been arrested in protests decrying racism and police brutality in the wake of George Floyd's death, according to an Associated Press tally of known arrests across the U.S.

The count has grown by the hundreds each day as protesters spilled into the streets and encountered a heavy police presence and curfews that give law enforcement stepped-up arrest powers.