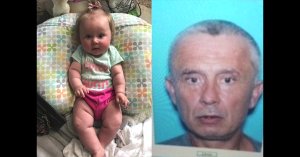 DANVILLE, VA – The seven-month-old baby kidnapped by her convicted sex offender father has been located and is safe, according to the Danville Police Department.

Carl Ray Kennedy was armed and had just assaulted the baby’s mother.

He has been arrested and is in custody in North Carolina.

The baby appears to be in good health and has been taken to a hospital for a checkup.

The AMBER Alert has been cancelled.

EL PASO, Texas (Border Report) – It’s called a filibuster, and it’s the reason Senate Republicans may get the final say on whether 11 million unauthorized immigrants receive legal status or not.

“It is the ability to not end debate on a bill. In order to stop a filibuster, you must have 60 votes for cloture. That ends debate and calls for a vote under parliamentary procedure,” said Charles Boehmer, professor and chair of the Political Science Department at the University of Texas at El Paso.

The man, identified as 66-year-old Kevin Gavin, was arrested for allegedly killing three women between 2015 and 2021 at the New York City Housing Authority’s Carter G. Woodson Houses in Brownsville, Brooklyn.

WASHINGTON (NewsNation Now) — Dr. Anthony Fauci, in his first coronavirus briefing of the Biden administration, delivered an assessment of the pandemic one year after the first case was discovered in the U.S.

"We are still in a very serious situation," Fauci said. "I mean, to have over 400,000 deaths is something that is unfortunately historic in a very bad sense. When you look at the number of new infections that we have, it's still at a very, very high rate."