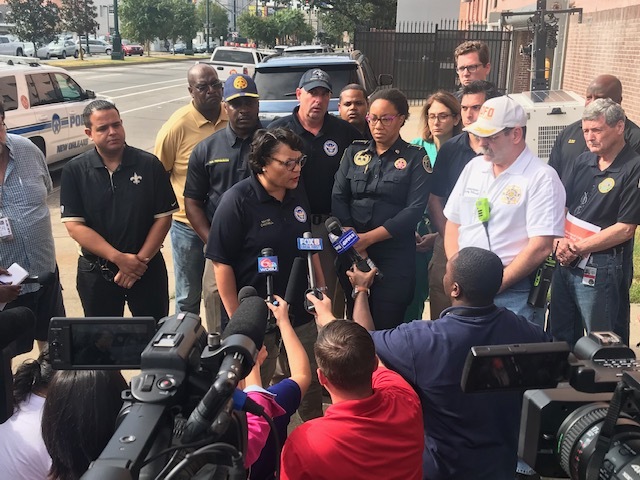 NEW ORLEANS – Mayor LaToya Cantrell joined public safety officials Sunday morning to provide the most recent updates in the response to the partial collapse of the Hard Rock Hotel building under construction in the downtown area of the city. Two people are confirmed dead with one other person unaccounted for.

“Search and rescue continues to remain our top priority at this time. We want people to heed all traffic precautions that we have put out as we stabilize this area. This is going to be a long process, and we just want people to pay attention to any advisories that come from the Mayor’s Office of Communications,” said Mayor Cantrell, noting that Monday will begin the start of the business week with major road closures in the downtown area as well as adjustments to public transportation service.

Several businesses in the vicinity remain closed, including the Saenger Theatre – which experienced a puncture in its roof from the collapse – as well as the New Orleans Athletic Club.

NEW ORLEANS FIRE DEPARTMENT (NOFD)
NOFD continues to operate in a search and rescue mode as operations work to locate the third missing person in the building. Technical specialists from the City are on the scene as part of a Unified Command. NOFD is working closely with engineering teams to develop an action plan with a focus on safety for all involved and will assist in setting up crane operations to help stabilize the building.

NEW ORLEANS EMERGENCY MEDICAL SERVICES (NOEMS)
NOEMS has activated multiple resources and is ready to provide any additional assistance including service to local hospitals. As was reported previously, NOEMS transported 18 injured patients to several hospitals, while 11 others visited hospitals on their own accord. All but one patient has been released as of Sunday morning.

NEW ORLEANS HEALTH DEPARTMENT (NOHD)
NOHD is continuing to work on family reunification for three families and facilitated discussions Saturday evening between the families and Mayor Cantrell. NOHD was able to facilitate placement of approximately 20 evacuees to nearby hospital rooms and has begun to assess long-term housing options and behavioral health needs for those affected. After meeting with the families, Mayor Cantrell visited the remaining injured patient at a local hospital. Emotional and mental health services are available 24/7 through the Metropolitan Human Services District. Anyone can call 504-826-2675 to access those free services.

DEPARTMENT OF PUBLIC WORKS (DPW)
DPW had to perform several courtesy tows of vehicles in the area to facilitate the operation. Owners of towed vehicles may call 3-1-1 to recover their vehicles. Residents whose vehicles remain in the no-entry area are asked to remain patient. It is not safe to enter the area at this time.

NEW ORLEANS REGIONAL TRANSIT AUTHORITY (RTA)
RTA’s Central Transit Hub, which is located close to the construction site, has been temporarily relocated to RTA’s main facility at 2817 Canal St., where shelter, access to restrooms and more information to passengers throughout the duration of the service disruption. Streetcar service has been suspended for the Riverfront, UPT-Rampart, and Canal (below) Liberty Street) lines. The Bus Bridge is in place for the UPT-Rampart line and Canal. Riverfront passengers are encouraged to use the 5 and 55, which pass through the French Quarter.

Due to both the road closures and service disruptions, Mayor Cantrell encourages both for residents to build more time in their commute – whether it’s to work or for school Monday, and for area businesses and schools to prepare for the possibility of late arrivals employees and students.

A Subway franchisee in Ireland lost a taxation case after the Supreme Court ruled that the sandwich bread had too much sugar to meat the legal definition of bread, according to the Irish Independent.

Bread, which is considered a "staple" food under the country's laws, has a zero value-added tax.

DALLAS (NewsNation Now) — Two of America's top airlines are furloughing thousands of workers with no new agreement on the table in Washington, D.C.

American Airlines announced 19,000 workers will be furloughed beginning on Thursday.

BATON ROUGE, La (BRPROUD) - LSU leaders said they are not happy with the number of people getting tested for COVID-19.

During a weekly meeting, administrators said there are 20 new positive cases. 15 of them are students. They said most traditional college aged students aren't negatively affected by the virus. Many of them may be asymptomatic.

Dr. Birx: No pressure on CDC from White House to relax school guidelines

Dr. Birx: In-person learning should be a school-by-school decision

Baton Rouge man arrested for murdering a woman back in July

Rosalyn loves: 7-year-old who hugs cops in every state spends birthday with JPSO

Dr. Birx: No pressure on CDC from White House to relax school guidelines