UPDATE: NOPD has identified the two women who tried to use Mark Bakotic II’s credit cards. If you have any information on the whereabouts of 34-year-old Karima Peters or 31-year-old Brittany Pinera is asked to call Fifth District detective Johnny Magee at 504-658-6050 or CrimeStoppers at 504-822-1111.

NEW ORLEANS (WGNO) – NOPD is looking for a 21-year-old man who was last seen at Republic Night Club downtown on Dec. 30. 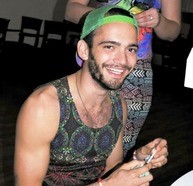 According to NOPD, Mark Bakotic II’s credit cards have been used at several locations, including Magnolia Discount Supermarket on North Claiborne Avenue on Dec. 31 at 2:48 a.m.

Bakotic’s friends told police that they were at Republic in the 800 block of South Peters Street. Bakotic had taken a drug called 2CE before he wandered away from the club.

He is described as 6-foot, 4 inches tall, 185 pounds with short brown hair. He was last seen wearing a blue long-sleeve button-down shirt and blue jeans.

The women who tried to use Bakotic’s credit cards left the Magnolia Discount store in a black Acura. Photos of the women are below.

If you have any information about Mark Bakotic II’s whereabouts or the identity of the women in the photos pulled from surveillance video please contact Detective Johnny Magee or any Fifth District detective at 504-658-6050.

Duplain “Pete” Rhodes was the patriarch of New Orleans’ own Rhodes Family of Businesses.

(NewsNation Now) — Chelsea Hunter’s 19-year-old sister, Sierra, disappeared in Oklahoma in April. Sierra Hunter is one face of an epidemic of unsolved cases of missing and murdered Indigenous women across the United States.

TAMPA, Fla. (WFLA) — In the weeklong search for Brian Laundrie, the trail remained cold and silent. There was no sign of him, no breaks in the high-profile case.

Woman accused of driving on Oklahoma bike trails with baby in back seat, sending people scattering

CORONER: Remains found in alligator’s stomach are that of missing Slidell man

Daylight saving time: When do we ‘fall back?’

VIDEO: Injured crow rescued in Metairie after getting head stuck in fence

‘Sex and the City’ star Willie Garson dies at 57