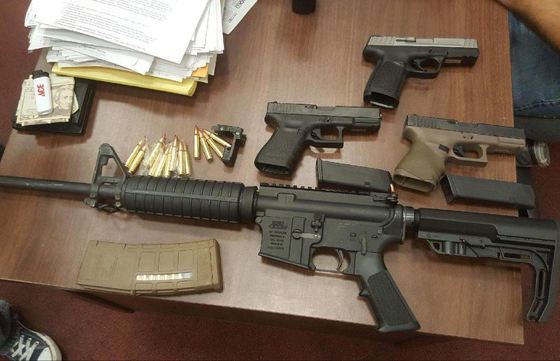 NEW ORLEANS – Officers took 24 illegal guns off the street during the Thanksgiving holiday weekend, including an assault rifle a man had hidden in his pants in the French Quarter.

“Because of the hard work of the men and women of the New Orleans Police Department and the Louisiana State Police, we did not have gun violence as we have seen in years past,” according to Eighth District Commander Nicholas Gernon said at an afternoon press conference on the steps of the NOPD’s Eighth District station.

With tens of thousands of football fans in town for the 44th annual Bayou Classic, hundreds of extra police officers were out in force to maintain order, Gernon said.

“Fifteen of those gun arrests came Saturday night alone, including a large assault rifle at the intersection of Canal and Bourbon Streets,” Gernon said. “Our undercover officers were on patrol when they observed an individual smoking marijuana. They stopped him, they arrested him, and then they found that he also had a rifle hidden in his pants.”

Gernon noted that last year’s gun violence after the Bayou Classic was perpetrated by two men with handguns, so the presence of an assault rifle was very worrying for police officers.

The arrests “demonstrates that our officers are out there, they’re actively involved, they are making gun arrests, and they’re really pressing forward to make people safe down here,” Gernon said.

State Troopers issued a total of 220 citations, responded to 108 calls for service and participated in 298 agency assists with the NOPD.

10:30PM Weather: Dense Fog Alert! Advisory in effect until 6AM!

New Orleans’ forecast for overnight looks mostly dry and muggy. Today we were dealing with above normal temperatures, and warmth remains the theme until late week!

Again, fog will be becoming widespread once more all night tonight until Monday, so a Dense Fog Advisory remains in effect from 6 PM – 6 AM across the Louisiana, Mississippi Gulf Coast.

NEW ORLEANS — Barbara Chifici, the matriarch of the family that owns and operates the popular Deanie's Seafood Restaurants has died.

The crash occurred about 4:45 pm today.