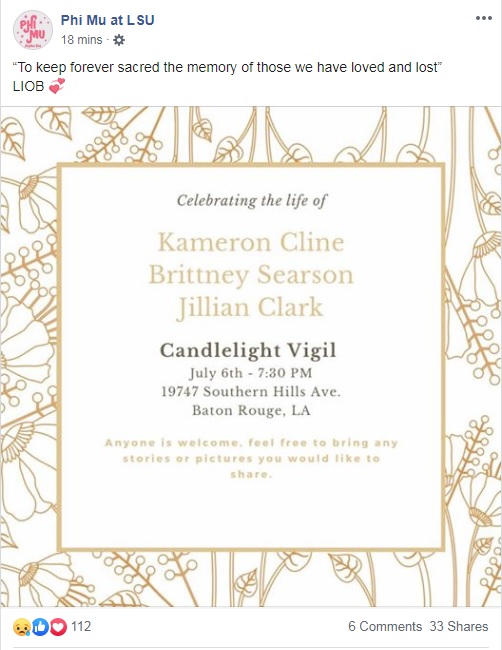 Reports show the helicopter went down with seven people on board.

Officials report they recovered the bodies of all seven passengers, four female and three males.

The owner of the helicopter, coal billionaire and philanthropist  Chris Cline, died in the crash.

Also killed in the crash was his daughter, Kameron Cline, a student at LSU in Baton Rouge, and a member of Phi Mu sorority.

Two other Phi Mu members, Brittney Searson and Jillian Clark, were killed in the accident.

A public vigil is being held in their honor, on Saturday, July 6, in Baton Rouge.

It was reported missing around 2:50 P.M. when it didn’t arrive in Fort Lauderdale, its intended destination.

Police officers and residents of Grand Cay discovered the aircraft overturned in 16 feet of water about two miles off Grand Cay in the Abacos.

THE HAGUE, Netherlands (AP) — British lawyer Karim Khan was sworn in Wednesday as the new chief prosecutor for the International Criminal Court, pledging to reach out to nations that are not members of the court and to try to hold trials in countries where crimes are committed.

Khan, a 51-year-old English lawyer, has years of experience in international lawyer as a prosecutor, investigator and defense attorney. He takes over from Fatou Bensouda of Gambia, whose nine-year term ended Tuesday.

MUNICH (AP) — Greenpeace has apologized and Munich police are investigating after a protestor parachuted into the stadium and injured two people before Germany’s game against France at the European Championship.

The protestor used a powered paraglider with a motor attached to his back but lost control and hit overhead camera wires attached to the stadium roof, careening over spectators’ heads before he landed on the field ahead of Tuesday's game. Debris fell on the field and main grandstand, narrowly missing France coach Didier Deschamps.

UPDATE: Community comes together to support mother of Baby Legend