NEW ORLEANS — Former City Councilman Oliver Thomas was in a serious car crash Thursday evening that injured his two children and ended with him being arrested for an outstanding traffic ticket he never paid in St. Charles Parish.

Thomas, now a radio talk show host on WBOK 1230 AM, held a press conference Friday afternoon to address his arrest.

The 61-year-old was driving with his children on Read Boulevard toward Chef Menteur Highway Thursday evening when another vehicle driven by an elderly woman struck Thomas’ vehicle and sent his car into a ditch at the corner of Read and Dwyer Road.

Bystanders had to help get Thomas and his children, including his 21-month-old son, out of the car.

Thomas said it was a terrifying moment for him, having lost his first son in a car accident years ago. 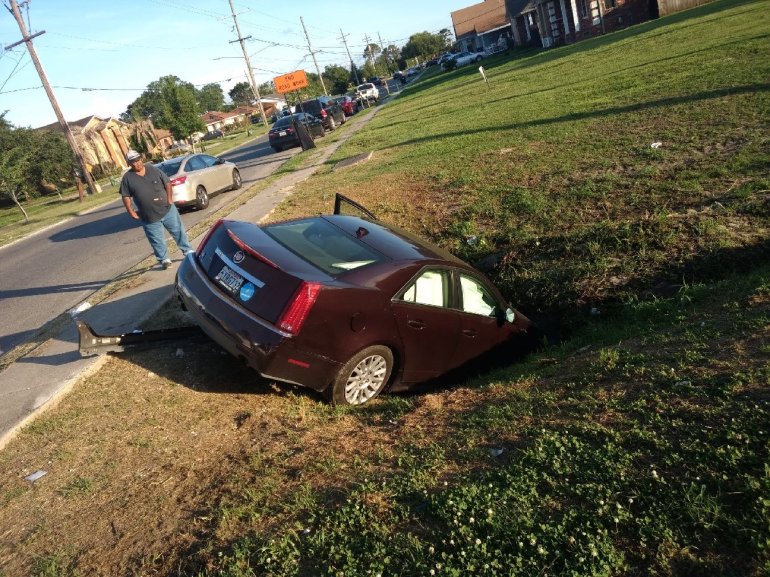 Thomas said he got a speeding ticket in St. Charles Parish about two years ago that he forgot to pay. He was arrested Thursday while at the emergency room with his children. He was booked for the outstanding warrant and for driving with a suspended license.

“That was my fault. I don’t remember the notices,” he said. “I should have taken care of it.”

But a tearful Thomas, who was a high-profile politician and potential mayoral candidate when he was convicted on bribery charges in 2007, said much of the media’s coverage of his arrest Thursday was “open-ended.”

“Stories are sensational because of who I was and who I am. This is about our life,” Thomas said. “Maybe, like much of my life, this is a teachable moment for some of us. If you have issues out there that are outstanding, clear them up. Clean them up. Take care of them. At the end of the day, I don’t want any family, any child, or any loved one to go through what I went through for being neglectful about traffic citations.”

Watch the full press conference below:

VENICE, Italy (AP) — Away from the once-maddening crowds of St. Mark’s Square, tiny Certosa island could be a template for building a sustainable future in Venice as it tries to relaunch its tourism industry without boomeranging back to pre-pandemic day-tripping hordes.

Private investment has converted the forgotten public island just a 15-minute waterbus ride from St. Mark’s Square into a multi-faceted urban park where Venetians and Venice conoscenti can mix, free from the tensions inherent to the lagoon city’s perennial plague of mass tourism.

Russia mandates vaccinations for some as virus cases surge

MOSCOW (AP) — They tried grocery giveaways and lotteries for new cars and apartments. But an ambitious plan of vaccinating 30 million Russians by mid-June still has fallen short by a third.

So now, many regional governments across the vast country are obligating some workers to get vaccinated and requiring the shots to enter certain businesses, like restaurants.

BOSTON (AP) — They were convicted of the same crime: the 2011 killing of a Boston teen as part of a gang feud. But Nyasani Watt — who pulled the trigger — will be able to fight for his release on parole after 15 years because he was only 17 at the time of the killing.

Sheldon Mattis, who was just eight months older, was ordered to spend the rest of his life behind bars.

Harris heads to border after facing criticism for absence

US to keep about 650 troops in Afghanistan after withdrawal

World-record ‘beast’ of a paddlefish caught at Oklahoma lake

Look up tonight to see the final Supermoon of 2021!

What should I know about the delta variant?

Popeyes offers ‘I Don’t Know Meal’ for the undecided diner

WATCH: Highlights of 7-on-7 football at St. Charles Catholic Wednesday

Nearly all COVID deaths in US are now among unvaccinated

Russia mandates vaccinations for some as virus cases surge

Harris heads to border after facing criticism for absence