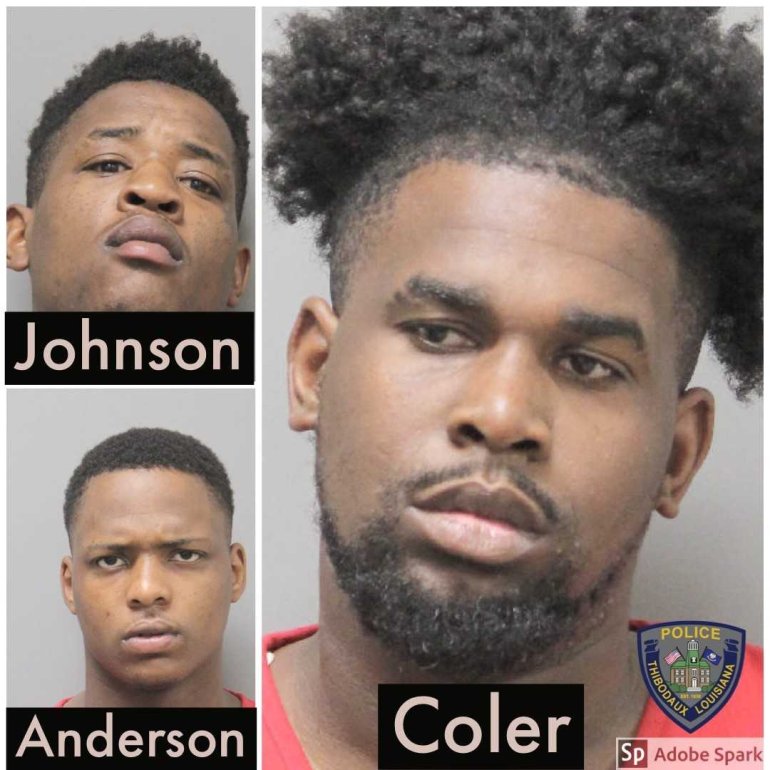 THIBODAUX, LA – According to the police, the suspects ran into a telephone pole, and then attempted to flee the scene.

Thibodaux Police Chief announced that three suspects were arrested in connection to the hit-and-run at the police station.

Around 2:30 P.M. on March 11, officers say they responded to the parking lot of the Thibodaux Police Department, in reference to a hit-and-run crash.

Records show that a Hinda Civic had a tire malfunction, causing it to crash into a telephone pole near the station entrance, damaging police property as well as disabling the vehicle.

Officials say the suspects fled on foot, but shortly after the incident, 20-year-old Carmicheal Anderson, 24-year-old Kinwyan Coler, and 21-year-old Landon Johnson were located and arrested.

Further investigation revealed that Coler was driving without a license, and had an active warrant out, for child support.

Officers also learned that while fleeing, Anderson gave Coler a pill bottle, with instructions for him to dispose of the pill bottle in a nearby trash can.

The pill bottle was found to contain suspected methamphetamine and suspected synthetic cannabinoid.

Johnson was also found to be in possession of suspected MDMA, and a large sum of cash on his person.

Carmicheal Anderson was charged with obstruction of justice.

Landon Johnson was charged with possession of MDMA.

NEW ORLEANS (AP) — New Orleans officials are sounding the alarm after data from neighborhood testing showed that the city’s Hispanic community is being disproportionately infected with the coronavirus.

City health director Jennifer Avegno said that officials had analyzed the roughly 5,000 tests that had been done at testing sites around the city in recent weeks in partnership with Louisiana State University and LCMC Health.

The National World War II Museum will reopen in honor of Memorial Day.

The museum will operate with a limited capacity and with enhanced safety protocols.

CHALMETTE, La.-- This Memorial Day looks different at the National Cemeteries because they aren't doing the traditional flag placements due to Covid-19 pandemic. WGNO's Kenny Lopez found a veteran who found a cemetery that allowed him to place flags at their cemetery this Memorial Day weekend.