Skip to content
This is an archived article and the information in the article may be outdated. Please look at the time stamp on the story to see when it was last updated.
UPDATE: Parents had a heated exchange with leaders of Sophie B. Wright Charter School Tuesday evening. They were upset about their children being banned from the graduation ceremony. Many of them their understood that their needed to be some sort of punishment, but thought the banning from the graduation ceremony was too much. Faculty told parents they would not discuss disciplinary actions of individual students in a public forum. Parents were taking the next step of filling out appeal forms. The school’s next meeting is said to be on Tuesday, April 16th. NEW ORLEANS – Some are calling it a harmless prank, but Sophie B. Wright school officials say the students did more damage than the viral video shows. Students can be seen on cell phone footage spraying each other with water guns, while running around outside. But on April 8, a statement from a school official explains that the students used water balloons, water guns, eggs, vinegar, and mustard, to vandalize the inside and outside of the school. The students who participated in the senior prank have so far been banned from walking the stage at graduation, banned from attending senior prom, and were suspended for five days. And now, Sophie B. Wright High School Board President James Watson says the students involved may be facing criminal charges:

“The incident on April 5 caused injury to at least one teacher and one student. Additionally, school property was sprayed with water and a restroom was compromised. Both personal injury and effects on property are currently under investigation. It is possible that damage caused by these students will result in criminal and civil actions.”

The full statement from the board president can be read below. 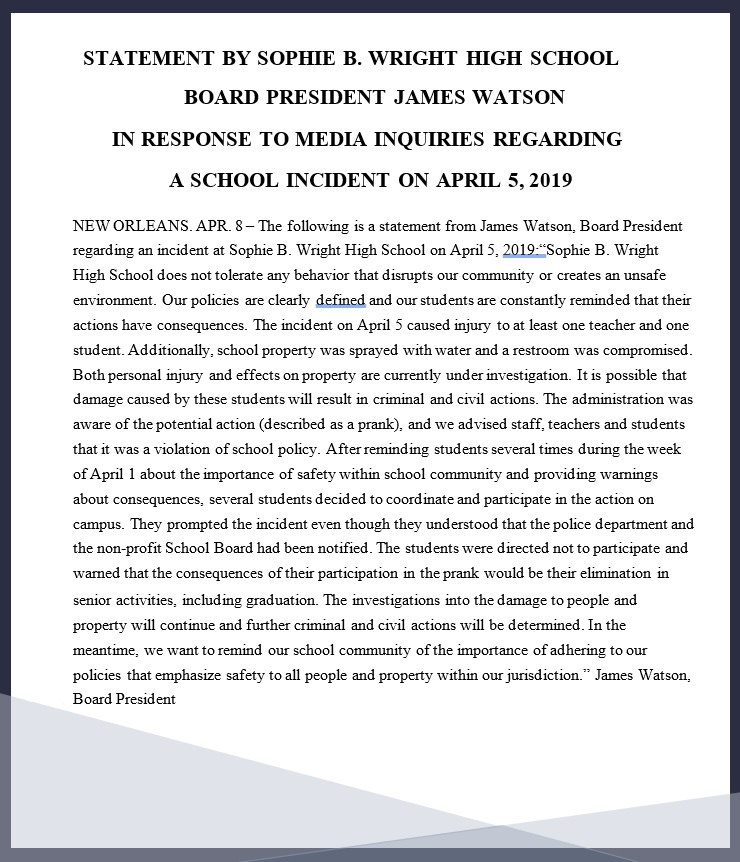 The department made the announcement this afternoon following its decision in June to spend more than $1 million on the program.