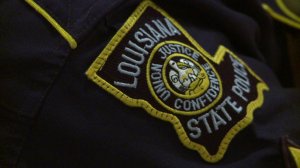 LACOMBE, LA — Louisiana State Police say a motorcyclist was killed Tuesday afternoon in a crash in the Lacombe area.

Troopers say the crash happened at about 1:45 in the afternoon at a location that is 1.5 miles east of Hwy 190 and Hwy 434 in the Lacombe area.

According to troopers, 45-year-old Michael Joseph Gros of Slidell was riding a Suzuki GSXR 1000 motorcycle eastbound on Hwy 190.  They say Gros merged into the oncoming traffic lane and attempted to pass five vehicles.  While trying to complete the pass, troopers say Gros lost control of the motorcycle while moving at a high rate of speed.  They say the motorcycle left the roadway, went into a ditch, and crashed into a telephone support rod.

According to a written statement announcing the crash, Gros was wearing a DOT approved helmet but still suffered severe injuries and died after being transported to an area hospital.

NEW ORLEANS - Mardi Gras is exactly one week away and the carnival season spirit is at an all-time high!

If you think you've seen it all, you may want to think again!

METAIRIE, La.-- If you ask any string musician in town about Salvador Giardina, the term you hear most to describe him is 'trusted craftsman.'

Sal is a luthier, or one who builds and repairs string instruments and he runs a business that features old world skill with few peers in our city.

NEW ORLEANS - The Humane Society of Louisiana (HSLA) is now coordinating its fourth annual Mardi Gras Parade Horse Adoption Program. The charity has found homes for 55 horses during the past three years.

Cascade Stables, which leases horses in Audubon Park, has provided horses to carnival krewes for many years. However, in order to meet the demand for additional parade horses during the carnival season, Cascade purchases about 20 additional horses from a broker. Prior to the adoption program, if these horses were not sold to new homes immediately after Mardi Gras, they were sold back to the broker, who would resell them at auction barns - potentially for slaughter.