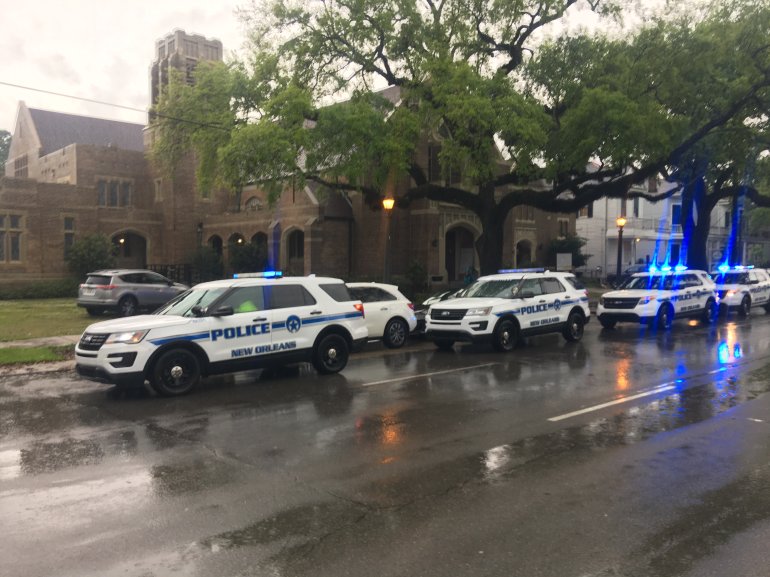 NEW ORLEANS – The NOPD is investigating a stabbing that happened outside of a church on Canal Street.

Officers received the call around 8:45 A.M. and responded to the 4300 block of Canal Street.

New information reveals there were three victims; two adults and a three-year-old.

The adult female victim was reportedly stabbed in the neck and back.

She was transported to an area hospital and is listed in critical condition.

The male victim suffered a cut wound to the arm, and received treatment at the scene.

With the male victim was a the three-year-old female, who was unharmed in the incident.

The attack happened at the Canal Street Church which also operates a daycare and early learning center with about 40 children.

According to the church’s pastor, Page Brooks, the man and woman who were hurt were in the process of dropping off their children for the day when the attacker struck unprovoked.

”Right after that, one of the staff members of the church was coming out the door,” Brooks told reporters at the scene.  “The female victim, the mother, came running up to him saying, ‘Help,help.’  So he was able to immediately call police and the EMTs.  Just a few minutes later, I understand, police were able to arrest the lady.”

The suspect, 46-year-old Uhuru Howard, was arrested near the crime scene.

Howard is believed to have a mental disturbance.

She will be booked into the Orleans Parish Justice Center for three counts of attempted first-degree murder.

The daycare center closed for the day, and parents were called to pickup their children.  Brooks said the center would reopen on Friday.

“We have a counseling ministry here at the church, and so we are offering counseling to the teachers and the staff and any of the families that might need that for their own health,” Brooks said.

This investigation is ongoing and we will continue to update this as more information becomes available.

Anyone with information is asked to contact NOPD Third District detectives at (504) 658-6030.