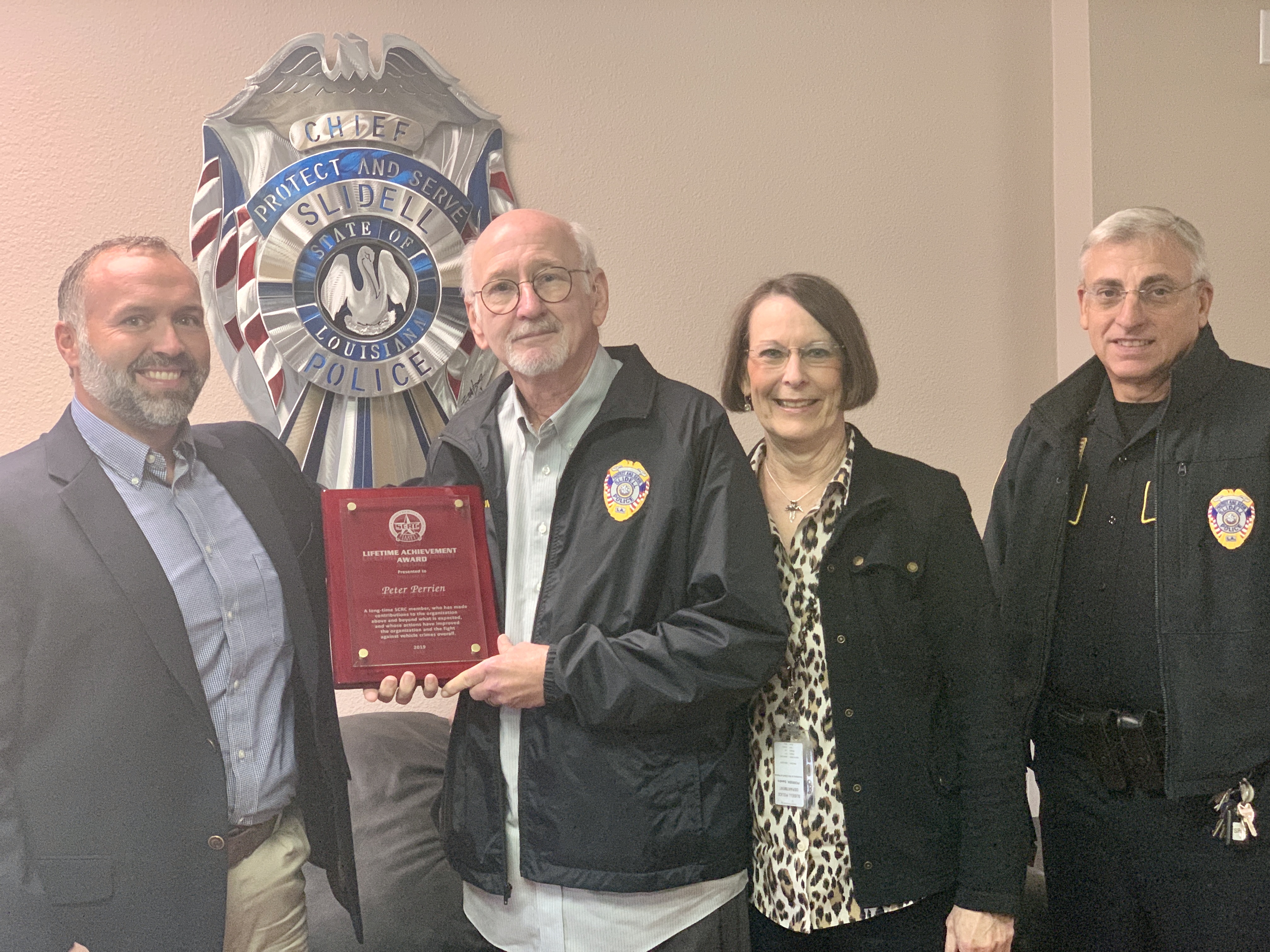 SLIDELL, LA – Peter Perrien, who is currently an employee of the Slidell Police Department and is assigned as the liaison for the District Attorney’s office, has had a long career in law enforcement and with the South Central Regional Chapter of the International Association of Auto Theft Investigators (SCRC/IAATI). SCRC feels that Pete’s contributions over the years should be recognized.

Pete joined the New Orleans Police Department in 1972, where he had a distinguished career working patrol, Intelligence, Organized Crime and Dignitary Position. Pete was also a member of the FBI/NOPD Public Integrity Special Operation Unit.

In his career, Pete has also faced his share of danger. He was shot in the face while answering a disturbance call. Fortunately, tough guy that he is, Pete recovered fully and came back to work as soon as he could.

After retiring from NOPD in 2000, Pete was hired by LoJack and also became the Regional Director for SCRC. In 2005, IAATI was holding their yearly conference in New Orleans, and Pete stepped up and was an integral part of making that conference successful. But as they saying goes, “No good deed every goes unpunished.” and Katrina showed up at Pete’s door two weeks later. His house was completely flooded and it took two years to rebuild. Even this didn’t stop Pete!!

Pete became active in the IAATI board in 2010 and was elected President in 2013. He also maintained his position as SCRC Regional Director, a position that he still holds today.

Every law enforcement organization, of which Pete has been a member, has benefited from his hard work, dedication and expertise.

Pete has been an invaluable instructor of LoJack products and operations at SCRC’s yearly training seminars. Pete also keeps up on excellence in auto theft detective work in the State of Louisiana, and makes sure these officers are recognized by their departments.

Currently, Pete is working in the DA’s office in Slidell, LA and will continue to fight crime and suppress evil.

Former LSU standouts, Tim Quarterman and Emmitt Williams were a part of that Eberlein Drive team.

The defending champion Washington Nationals and reigning American League champion Houston Astros each called off training camp practices after not receiving test results from Friday. The cancellations come amid delays around Major League Baseball, with some players opting out, and in the aftermath of Nationals reliever Sean Doolittle criticizing slow test results and a lack of some personal protective equipment.

NEW ORLEANS - The NOPD is investigating a homicide that occurred on Sunday, July 5, in the Seventh District.

At around 5:44 p.m., NOPD Seventh District officers responded to a call of aggravated battery by shooting in the 7700 block of West Laverne Street.

Coronavirus can float in the air, and the WHO should clearly tell people that, says group of experts

Trump lashes out at NASCAR, Bubba Wallace over flag, rope

‘God has another angel’: Broadway star Nick Cordero dies at 41 after COVID-19 battle

In new PSA, Amanda Shaw explains the importance of wearing face masks during these times

Coronavirus can float in the air, and the WHO should clearly tell people that, says group of experts