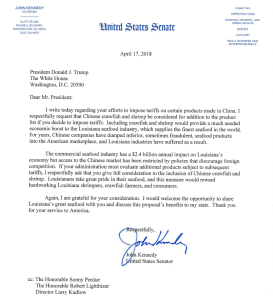 NEW ORLEANS – Louisiana Senator John Kennedy sent a letter to President Trump asking him to add Chinese crawfish and shrimp to his list of proposed tariffs.

“Including crawfish and shrimp would provide a much needed economic boost to the Louisiana seafood industry, which supplies the finest seafood in the world,” Kennedy wrote. “For years, Chinese companies have dumped inferior, sometimes fraudulent, seafood products into the American marketplace, and Louisiana industries have suffered as a result.”

Access to the Chinese market has put a dent in the $2.4 billion Louisiana commercial seafood industry, Kennedy wrote in the letter, which was postmarked April 17 and addressed to President Donald J. Trump.

“If your administration must evaluate additional products subject to subsequent tariffs, I respectfully ask that you give full consideration to the inclusion of Chinese crawfish and shrimp,” he wrote. “Louisianans take great pride in their seafood, and this measure would reward hardworking Louisiana shrimpers, crawfish farmers, and consumers.”

Bogalusa police find man shot in the head in apartment …