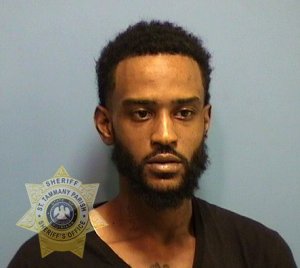 The incident happened at an apartment on Browns Village Road, in Slidell.

The victim told deputies he made plans to meet with an acquaintance at the apartment building.

Wilson invited the victim inside the apartment, where he pulled out a shotgun, and robbed the victim of $1,500.

Wilson also grabbed a handgun, and fired shots at the victim’s car as he was trying to get away.

The victim was able to flag down a St. Tammany Parish Sheriff’s deputy to report that he had just been robbed.

STPSO arrested Wilson the next day. He faces charges of armed robbery, armed robbery with the use of a firearm, and aggravated assault with a firearm.

Authorities say the victim was not injured during the altercation.