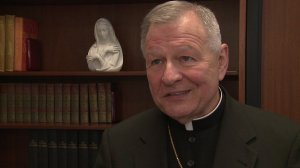 “The District Attorney’s office has received today’s disclosure by the New Orleans diocese of the names of church officials and employees against whom allegations of sexual assault have been made,” Ken Daley with the OPDA said. “As always, we stand ready to evaluate for possible prosecution any cases brought to us after investigations are completed by the New Orleans Police Department. District Attorney Leon Cannizzaro has a long track record of aggressively prosecuting those who sexually assault or exploit innocent children, and he will continue to do so whenever the evidence and the law allow.”

Archbishop Gregory Aymond said last month that he would release a list of archdiocesan clergy who have been “credibly accused” of sexual assault.

The NOPD issued the following statement about the potential for criminal investigations stemming from the list of names.

“The NOPD has not yet received any official communication from the Archdiocese of New Orleans containing names of clergy members accused of abuse and has only seen the list contained in local media reports. The NOPD is asking any victims claiming sexual assault by clergy, in the past or present, to come forward and file a police report. The NOPD will thoroughly investigate any allegations reported by potential victims of alleged abuse by clergy.”

GRETNA, La. (AP) — An appeals court has granted the killer of NFL player Joe McKnight a new trial because his manslaughter conviction was delivered by a split jury.

RIVER RIDGE, La. - After being a part of the John Curtis Boy's Basketball program for 28 years, Head Coach Mike Krajcer decided to step down.

"Coack Krajcer and I met several times and he had expressed to me the desire to move up administratively. He has been coaching for a long time and it’s a grind. It’s a 365 day a year job, so this opportunity opened up for him to move forward but we were not going to do that unless we found the right person,” says John Curtis Headmaster, J.T. Curtis.

NEW ORLEANS-- After being closed since Mid-March because of the pandemic, now the Audubon Aquarium of the Americas is getting ready to reopen tomorrow with new safety protocols in place. Today, Dumpty the Penguin lead us on a little tour of what's new.

Dumpty the 6-year old African Penguin at the Audubon Aquarium is leading the way to a new day.

How to use CPR to save a life

Coronavirus data is funneled away from CDC, sparking worries

Court clears way for federal execution of man with dementia

In the open: White House advisers tussle over virus response

Wendell Pierce recalls growing up in a National Historic District

Diabetes 101: why your blood sugar is a big deal

How to use CPR to save a life