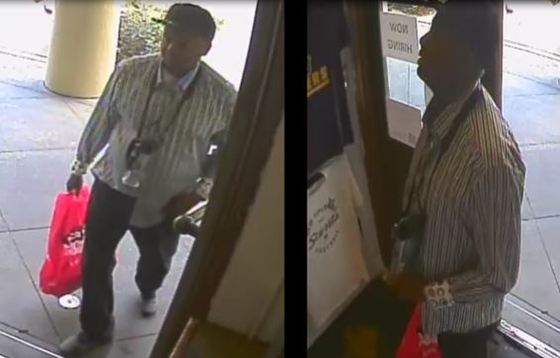 NEW ORLEANS – A man known to police as a habitual shoplifter walked into a store in the French Quarter and made off with a woman’s purse.

The theft occurred just after 12:30 p.m. on April 2 in the 900 block of South Peters Street, according to the NOPD.

The man made his way to the back of the store, grabbed the woman’s purse, and left with it.

Bank cards that were in the purse at the time it was stolen have been used at three different locations since the theft.

The suspect has been spotted around the shops in the French Market and Café Du Monde, and he is known to be a shoplifter, according to the NOPD.

Anyone with information on this incident or the wanted subject is asked to contact Detective Marshall Scallan (504) 658-6730 or any Eighth District detectives at (504) 658-6080.

MARRERO, La. -- A free covid vaccine drive-up is happening tomorrow, Monday, January 18, in Marrero. If you signed up for this event, we have the details you need to know before you go.

The InclusivCare drive-up will be at 1855 Ames Blvd. from 9am - 12 pm. Anyone who falls in the Tier I category, which includes people over the age of 70, healthcare workers and firefighters, can get the vaccine.

NEW ORLEANS -- The New Orleans Police Department is investigating a shooting that happened on the 1400 block of Teche Street.

Police say one man was injured in the shooting and taken to a local hospital by private transportation. The man's condition is unclear at this time.

It was another gorgeous day today across southeast Louisiana, though we are, area-wide, cooler than Friday nearly everywhere!

Frost remains possible Saturday morning, so remember all 3 Ps: people, pets, plants but fortunately, for these next 48 hours, pipes won’t face any problems! Winds have settled down, so that may not help break up any frost attempting to settle. Highs reach upper 50s to low 60s tomorrow afternoon after lunch.

More than 100 new places to get a Covid vaccine are open. Here’s where to go.

The Bloody Truth: The Haunted Tale of the Sultan’s Palace