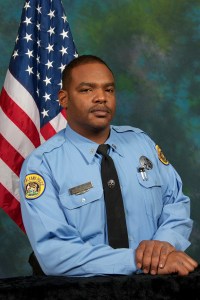 NEW ORLEANS (WGNO) –The NOPD is investigating the fatal shooting of Officer Daryle Holloway, a 22-year veteran of the New Orleans Police Department.

The incident occurred at the intersection of North Claiborne Avenue and Elysian Fields Avenue on Saturday.

“This is a tragic and very sad day for our police department and for the city of New Orleans,” said NOPD Superintendent Michael Harrison. “Officer Holloway was a dedicated police officer who proudly served his community for more than 20 years and was a father of three. He will be deeply missed by all who knew him. We have identified the suspect as Travis Boys, and we are working with our regional, state and federal law enforcement partners to arrest him for this heinous crime. He will be caught and he will be brought to justice for the murder of Officer Holloway and for this assault on our entire community.”

After 8 a.m., EMS responded to the scene of an accident involving a NOPD sport utility vehicle that had apparently crashed into an electric pole near a Shell gas station. Upon arrival, EMS discovered Officer Holloway in the front seat of the vehicle with an apparent gunshot wound to his body.

EMS transported the officer to the hospital, where he later died.

Holloway was 45-years-old and had been a member of the NOPD since 1992. He had been assigned to the Fifth District since 1998.

Holloway had been transporting Travis Boys, a 33-year-old black male, from NOPD to Orleans Parish Prison after Boys had been arrested for aggravated battery and outstanding warrants. Holloway was not the arresting officer.

According to the initial investigation, Boys shot Officer Holloway from within the vehicle during the transport. After the vehicle crashed, Boys fled the scene.

NOPD has identified Boys as the suspect for the murder of Officer Holloway, and a manhunt is underway for his arrest.

Public Integrity Bureau’s Force Investigation Team is in charge of the investigation and can be reached at 658-5300.

Regional and state law enforcement agencies, along with the U.S. Marshals Service, are assisting in the manhunt. Both the Independent Police Monitor and the Consent Decree Monitor were on the scene.

Investigators are currently in the process of gathering evidence and information to identify the person(s) responsible in this incident, as well as a motive.

Citizens with information that can help solve this crime are asked to call Crimestoppers at 822-1111 or toll-free 1-877-903-STOP. You could receive a cash reward of up to $2,500 for the information leading only to the arrest, except on homicides, where Crimestoppers will pay half of the reward upon the arrest and half on the indictment of the responsible person(s). You do not have to give your name nor testify to receive the reward but you must contact Crimestoppers directly with your information. Citizens can also submit an anonymous tip online.

Heavy rain and a lot of lightning continually moving through New Orleans. Hail reports are coming in across Destrahan as well as Mid-City as this is progressing southeast!

Pea-dime sized hail was just reported near University Medical Center as a straight-line wind event unfolds, with gusts between 60-70+ miles per hour as a main threat.

Do you have weather photos or video? Send them to pics@wgno.com.

NEW ORLEANS - NOPD believes carjackings across the city are becoming more dangerous as armed thieves are doing whatever they have to do to steal people's cars.

In fact, a woman is in the hospital after getting run over in a carjacking earlier this week.

Want to buy a house? These days, the trick is finding or affording one

Shot for shot! Get your vaccine then get a booze shot at Dragon’s Den bar

Rougarou: The legend of the Cajun werewolf