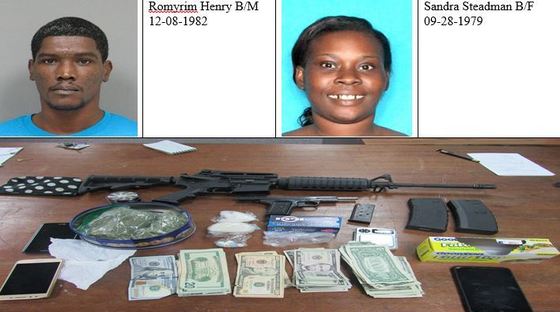 Fourth District narcotics detectives and the NOPD’s Special Operation Division served a search warrant on a home in the 3600 block of Tasha Place on January 29.

Thirty-five-year-old Romyrim Henry and 38-year-old Sandra Steadman were arrested at the scene and charged with possession of a firearm while in possession of illegal narcotics, possession with the intent to distribute crack cocaine, marijuana, oxycodone, and dog fighting, according to the NOPD.

EDGARD, La. (AP) — A Louisiana judge who resigned after being convicted on sex charges involving the fondling of teenage girls has been sentenced to 14 years in prison.

BATON ROUGE, La. (BRPROUD) -- A Jefferson Parish fourth-grader was nearly expelled for having his BB gun visible during a virtual class in September. But Louisiana lawmakers are giving him a warm welcome.

A state Senate education panel advanced legislation Monday that would require school districts to craft disciplinary policies specific to virtual learning. If passed, it would become the Ka'Mauri Harrison Act -- named after the nine-year-old student from Harvey.

NEW ORLEANS - In a crisis, you can create almost anything.

Inside a laboratory at New Orleans Delgado Community College, there's one word to describe what's being created.

Restaurant owners fear pandemic in winter could end their livelihoods

14 days out: Does the early voting surge translate into support for Trump or Biden?

Two weeks away: These are the key dates heading to Election Day

All 62 residents of Kansas nursing home test positive for coronavirus

Ranked: The rattiest cities in America

Texas woman died of COVID-19 while on commercial flight

The misconception of VooDoo

Fun facts from the Rex Den: Did you know there were no beads thrown in the early years of Carnival?

Restaurant owners fear pandemic in winter could end their livelihoods