They love them so much, in fact, that they did some research about one of their favorite NKOTB songs, “(You Got It) The Right Stuff.”

The video for the hit song was filmed in New Orleans, so Dr. Hamilton and her friends decided to do some research and go map out the music video “step by step.”

After mapping out the video locations, Hamilton wrote this and sent it to News with a Twist Reporter Kenny Lopez to take a look at.

“It was back in October of 1988, almost 30 years ago.  During the time of tight rolled jeans, denim jackets, and yes the ever-glorious big bangs.  When every teenage girl had a can of Aqua Net or Suave hair spray.  The New Kids on the Block just had a hit song called “Please Don’t Go Girl” and were rocketing to fame.  At the time, they were on tour with DJ Jazzy Jeff and the Fresh Prince (Yes Will Smith who would have thought?!).  The boys from Boston needed to make a music video, while continuing to tour, in anticipation of the release of “(You Got It) The Right Stuff”.  Grammy Award winning director Doug Nichol directed the video and historical New Orleans was the chosen as the background.

I remember being a teenager and seeing the video for the first time.  I grew up in South West Louisiana but have family in New Orleans so we made the trip often.  I thought to myself, “This looks like New Orelans.”  Of course, this was back in the day when the internet was not at our teenage fingertips.  You could not pause a VHS tape without those annoying horizontal lines.  Google earth was not available to figure out where exactly the filming had taken place.  Fast forward to 2017, not a problem for three mega Block Head fans (another name for NKOTB fans)!!

Part of this music video had been filmed in an old cemetery.  While I was on a tour of St. Louis Cemetery No. 1 many years ago, a tour guide/historian told me that after the filming of the movie Easy Rider in 1969 the Diocese had forbidden videoing in St. Louis Cemetery No 1.  I remember telling this tour guide/historian that he was mistaken because in 1988 NKOTB filmed a video in that cemetery.  The guide told me it was impossible and directed me to Lafayette Cemetery No. 1 in the Garden District.  He was adamant that the filming took place there.   In May of 2014, NKOTB had a concert in New Orleans at the Smoothie King Center.  The next day my friend Dawn and I went exploring New Orleans.  We took a trolley car down to Lafayette Cemetery No. 1 in the Garden District.  Still nostalgic from the concert the night before, we decided to screen shot some of the graveyard images from The Right Stuff video that were recognizable so that we could find them in the cemetery.  After searching for an hour, we could not find one spot that was familiar.  That night I went crazy with google earth.  I then realized I could figure out quite a few of the places where “The Right Stuff” music video had been filmed around New Orleans.  Not to mention, filming of this video unequivocally took place in St. Louis Cemetery No. 1.

Questions arose during our investigation of this video about filming in the historic cemetery.  After contacting the communications department with the Arch Diocese, it was stated that filming in all catholic cemeteries was completely curtailed in March of 2015.  This would be at the same time that the cemetery closed to the public without a tour guide.  Furthermore, after the filming of Easy Rider in 1969, of course the diocese kept a close eye on filming.  Records from the Diocese on filming in 1988 would be impossible to locate, but I was informed it is possible that approval went through the City of New Orleans.  Furthermore, Lafayette Cemetery No. 1 in the Garden District is not a Catholic Cemetery and therefore does not follow the same rules.  If anyone wants to film in St. Louis Cemetery No. 1 they must apply through the Diocese. 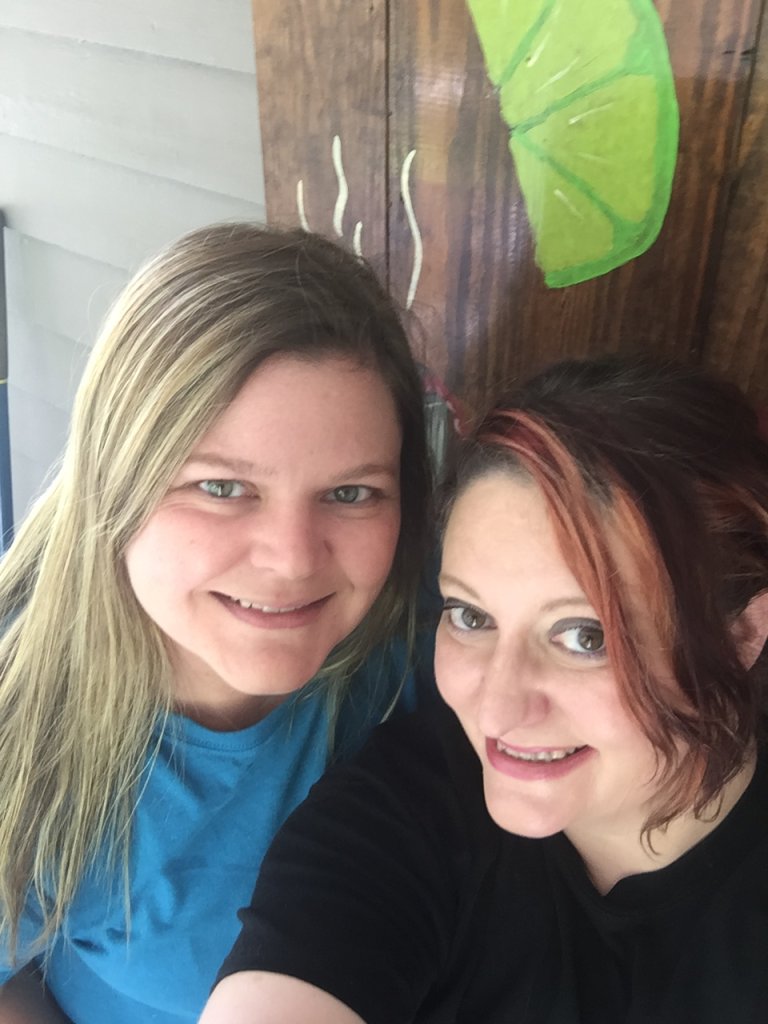 NKOTB will be returning to New Orleans May 19, 2017 for another much-anticipated concert.  My friend and I will be doing the famous “meet and greet” and standing in the “Pit” area for the concert.    If you are at this concert, or even doing the “meet and greet”, say hello and let us know if you enjoyed this article!!  Oh, and if you can score us some “real” backstage passes we would be much obliged!!

And now to present to you the location details of this music video for your field trip pleasure.  Why not make this even more fun?  If you decide to ride the video route around the time of the concert, or even this year’s NKOTB cruise, write Block Head on the back windshield of your car in shoe polish.  That way fellow Block Heads can recognize each other.

My friends Nicole, Dawn and I would like to present to you the location details of this music video for your field trip pleasure.  Let’s make this even more fun?  If you decide to ride the video route around the time of the concert, write Block Head on the back windshield of your car in shoe polish.  That way fellow Block Heads can recognize each other.

**Note:  Most of the filming in St. Louis Cemetery No. 1 took place in the same area of the graveyard.**

from the store.  There is no longer a street sign.

North.  Houses have been torn down so don’t expect the scenery to be exactly the

1:00     –     Same address at Thayer Street headed South.  Turn around, go toward the bridges, and turn Right on Mardi Gras Blvd.

Turn around, go toward the bridges, and the City of New Orleans.  Furthermore, Lafayette Cemetery No. 1 in the Garden District is not a Catholic Cemetery and therefore does not follow the same rules.  If anyone wants to film in St. Louis Cemetery No. 1 they must apply through the Diocese.

My friends Nicole, Dawn and I would like to present to you the location details of this music video for your field trip pleasure.  Let’s make this even more fun?  If you decide to ride the video route around the time of the concert, write “Block Head” on the back windshield of your car in shoe polish.  That way fellow Block Heads can recognize each other.

Check out these Google Earth images of the maps of where everything was shot. 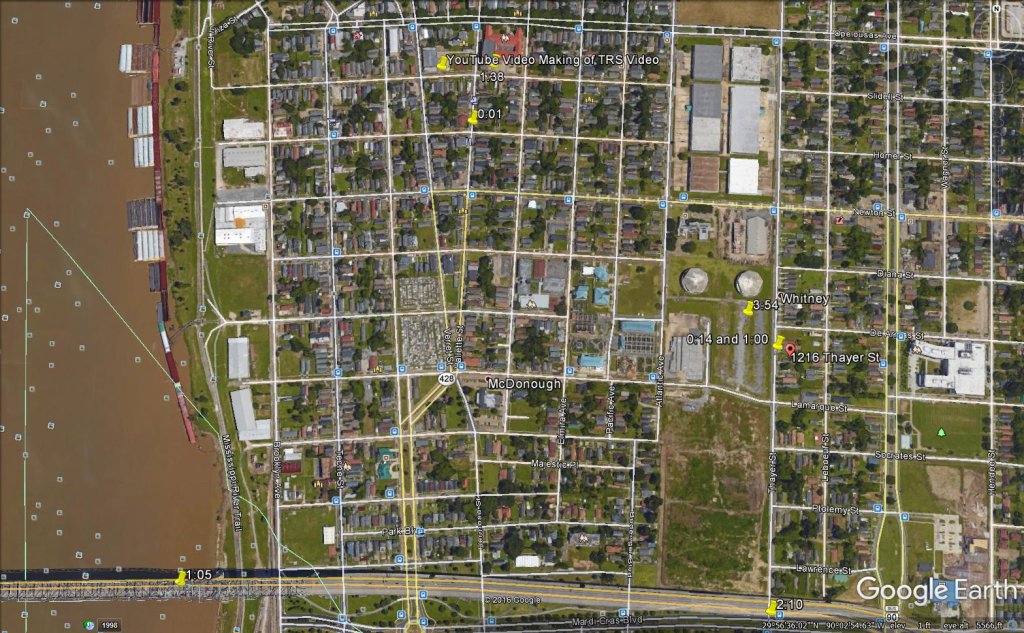 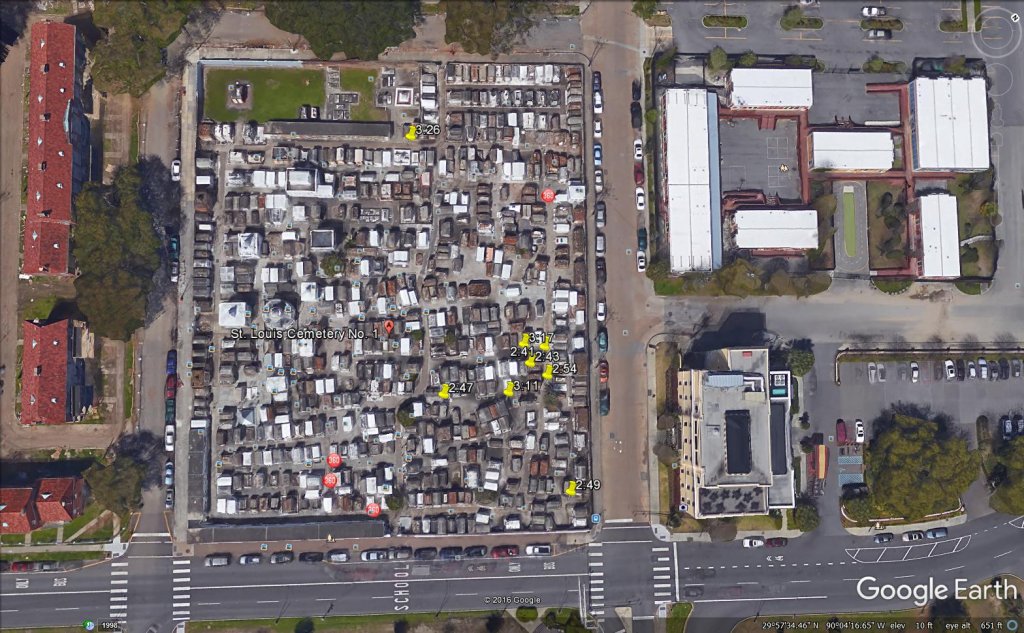 business district of New Orleans).  Note the old gondola ride in the background behind Donnie’s head from the 1984 World’s Fair (this structure was removed in 1994).

https://www.youtube.com/watch?v=yvIdoqmYxNs.  Apparently, this location was used

as a staging area for the video.

see the arches of the school in the background of this shot.

The area has changed completely since the filming of the video.  But the recognizable 2

location.  This area is completely different and has been dramatically changed since

the curve in the path you will see a grave entitled Famille Cha L. Mallot.  Take a right

before that grave.  Walk until you see the two brick graves on the left (these graves are in the background of the shot).  The video shot toward the direction from which you came.

front gate.  Walk straight in following the path going in the direction of the back of the

cemetery.  When the path turns to the right near the palm tree turn right.  The stone

grave will be a few graves down on the right.

proceed all the way down to the wall.  When you get to the wall of St. Louis Street turn

left and stop at the first grave on your left.  It will have a metal fence around it with a

suspended cross on the fencing.  Between this grave and the next grave on your left is

the front right hand part of St. Louis Cemetery No. 1.  It is rather large and is located

along the wall at St. Louis Street.

grave on the left (where the area narrows) with shelves.  Shot is toward the left with the

Street).  Once again use the two brick graves as markers.

The crypts run parallel to Treme Street.  The girl is running toward Conti Street with the

crypts on her right.   Note the Iberville Housing Development buildings in the background of the video.  This housing development has been torn down but is still visible in Google Earth.

background.  NKOTB are driving in a field in front of the domes.  The field now has a

scenes were reportedly filmed at this historic location.

Treme (just slightly North West of the French Quarter).  If you want to enter this

cemetery, you must pay a tour guide or have special passes from the Arch Diocese.   It is

the Hop On Hop off Bus Tour stop number 5 (Basin Station).  The tours of the cemetery

are very informative.  Tour guides usually stand outside the guarded gates waiting on

Sports Zone Podcast: Who will QB the Saints next season?

In this episode, the WGNO Sports team asks will the Saints and Drew Brees turn the page? And if so, what does 2021 have in store?

Bonnabel holds off Riverside for 15th win of the season

RESERVE, La. — The Bonnabel Bruins improve to 15-5 on the season with a dramatic 55-52 win over Riverside Academy Friday night in Reserve.

The Bruins and Rebels traded blows all four quarters, and the game was ultimately decided in the closing minutes.

NEW ORLEANS — After having already administered more than 86,000 COVID-19 vaccine doses within the first four weeks of distribution, Ochsner Health has been forced to cancel all scheduled first-dose vaccinations due to critical shortfalls in local supply according to an official statement sent on Friday evening.