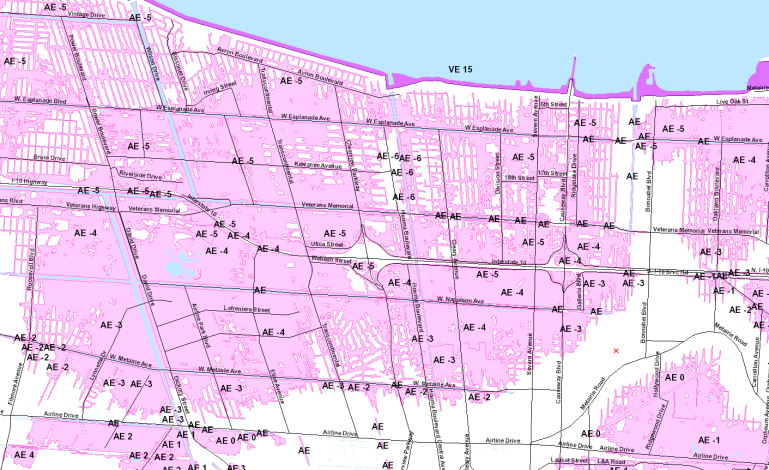 METAIRIE – It’s part of the institutional knowledge all Metairie residents begin developing soon after obtaining their drivers license – which streets to avoid when it floods.

One glance at the new Flood Insurance Rate Maps issued by FEMA that took effect February 2 will confirm what locals already know.

On the new maps, the pink of the easily floodable AE zone is splashed in a giant and nearly continuous swath from Avron Boulevard near Lake Pontchartrain to the other side of West Metairie Avenue.

Lake Street turns into a lake nearly every time it rains, so it’s in the AE zone, which denotes the highest flood risk.

The handful of man made hills in Lafreniere Park stand out like islands in a sea of pink.

Elmwood is an island of AE ringed by higher ground.

The famed Metairie Ridge presents on the map as a bright white ribbon following Metairie Road across the south side of Metairie, demarking the largest section of the low-risk zone X.

While those who find themselves in zone X on the new maps may qualify for special low insurance rates, the exact opposite is true for residents in zone AE, who will probably end up paying much more for their flood insurance.

The true impact of the new flood insurance maps remains to be seen, but nearly every rate in Metairie seems poised to change in one way or the other.

The lucky ones are already on higher ground.

BATON ROUGE, La. (BRPROUD) – LSU is preparing to vaccinate as many students and staff as possible before next fall, and students have very mixed reactions.

In 24 hours, more than 7,000 responded to a survey asking if they would take the COVID-19 vaccine.

NEW ORLEANS - On his lap top, He never logs off.

He works without a break.