NEW ORLEANS – The City of New Orleans may not own a statue of Confederate General P.G.T. Beauregard that stands at the entrance to City Park and is slated to come down.

Tulane University Professor Richard Marksbury of the Monumental Task Committee, a volunteer group dedicated to preserving all monuments in New Orleans, said the statue in question has never been the property of the City of New Orleans.

“City Park, as an incorporated association of the Lieutenant Governor’s Office, owns the land that the monument is on, and owns the monument,” Marksbury said.

Marksbury led a lawsuit against the city aimed at preventing the removal of any of the four statues the City Council has declared a “public nuisance” – the Beauregard statue, a statue of Confederate President Jefferson Davis, the statue of Robert E. Lee in Lee Circle, and the recently removed Liberty Place monument.

While Marksbury lost that lawsuit, allowing the city to move forward with the removal process, he said the decision may have gone another way had the judge in the case had access to documents he said proves that the City does not own the Beauregard statue.

“We now have some documents that I believe make a difference,” he said.

The land where the Beauregard monument is located was sold in the year 1900 to City Park, Marksbury said.

City Park was incorporated as a private non-profit in 1899, and the park’s governing board has continued to renew that status every so often, Marksbury said.

In 1997, City Park’s Board of Commissioners president Gary Solomon sent a notarized statement to the National Historic Register that included a statement of ownership, according to Marksbury.

The National Historic Register lists the Beauregard statue as standing on private property, while the Robert E. Lee statue stands on public land, he said.

The burden, Marksbury said, is now on the city to produce a bill of sale affirming that it owns the statue and not City Park.

“Unless there’s documents that show that since Gary Solomon wrote this in 1997 that City Park sold that [statue] to the city, and there’s an act of sale, which I don’t believe exists, than City Park owns this statue and has owned it since it was put up,” Marksman said. 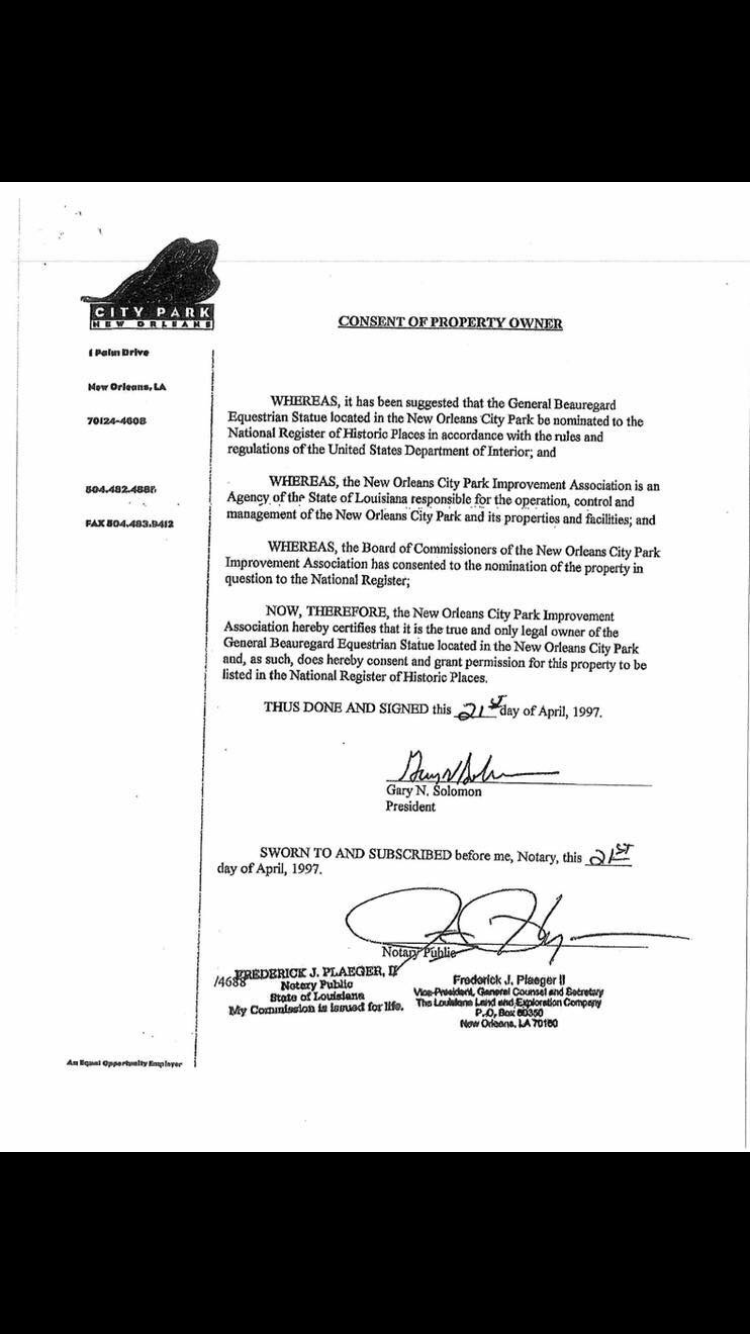 NEW ORLEANS -- The New Orleans Police Department is investigating a shooting that happened overnight on the 4900 block of Wright Road.

Police say a toddler was hit and taken to a local hospital; his condition is unknown at the time.

The New Orleans Saints continue their march toward Super Bowl LV and the WGNO Sports team take a deep dive into the third meeting of the season between bitter NFC South rivals, however this time it's to decide which team stays in the hunt for the Lombardi Trophy.

It's Brees vs Brady III as the New Orleans Saints host the Tampa Bay Buccaneers in a NFL Divisional Round matchup in the Superdome on Sunday.

In this episode, the WGNO Sports team talks the third meeting of the season between Drew Brees and Tom Brady. The Saints pop the Bucs twice, but can they do it in triplicate? They certainly have the attention of the opposing quarterback.

Johnson & Johnson one-dose COVID-19 vaccine may be on horizon

Risky driving: US traffic deaths up despite virus lockdowns

Home in St. Louis murder case lists for nearly $360K; buyers line up for a look

Brazen afternoon shooting prompts restaurant to give back on MLK Day

Third stimulus check: Here’s when you might get a $1,400 direct payment

Warning: Stennis rocket test on Saturday will be LOUD.