SLIDELL, La. – Two missing people who were found in a submerged vehicle in Pearl River were both shot in the head during what police officials are calling a “carjacking gone bad.”

St. Tammany Parish Sheriff Randy Smith said at a press conference this morning that 20-year-old Raegan Elizabeth Day was shot twice in the head and 28-year-old Dustin R. Hartline was shot once in the back of the head.

Eighteen-year-old Jason Landry and 25-year-old Brittney “Beezy” Savell, who both live in Slidell, were arrested in Waveland, Mississippi, while 22-year-old Derrion Lemoine and 27-year-old Steve “Stevie” Olivieri were arrested in Louisiana.

“We learned during this investigation that this was a carjacking gone bad,” Smith said. “These four individuals that were arrested for first degree homicide had planned this, premeditated this.” 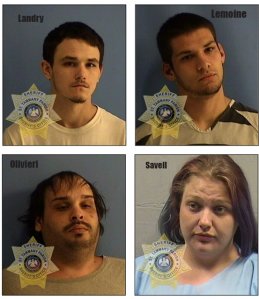 “They had masks on, they used guns, and, to steal this 2011 Chevrolet Camaro, they used force,” Smith said. “Both these two individuals were shot, and then put in the vehicle and driven to the boat launch, where the car was disposed of.”

Day and Hartline were reported missing on February 16, but investigators believe both were killed the day before.

Due to the advanced state of decomposition of both bodies, identification was made in each case through tattoos.

BRASILIA, Brazil (AP) — Brazilian senators met into Tuesday night discussing a report that will recommend President Jair Bolsonaro be indicted on criminal charges for allegedly bungling the response to the COVID-19 pandemic, and pushing the country's death toll to second-highest in the world.

The latest draft of the report arising from a Senate committee's investigation, a copy of which was reviewed by The Associated Press, recommends the president be indicted on 11 charges, from charlatanism and inciting crime all the way up to homicide and genocide.

(NEXSTAR) — Now that Taco Bell has brought breakfast back to its menus, the restaurant chain is celebrating by giving away free food.

On Thursday from 7 a.m. to 11 a.m., Taco Bell will hand out free breakfast burritos at participating U.S. locations while supplies last.

BATON ROUGE, La. (BRPROUD) — An arraignment for a local pastor accused of violating COVID-19 restrictions put in place last year has been placed on hold.

Pastor Tony Spell will have to wait another 90 days before he will be back in front of Judge Eboni Rose at the 19th District courthouse again after allegedly violating COVID-19 mandates.