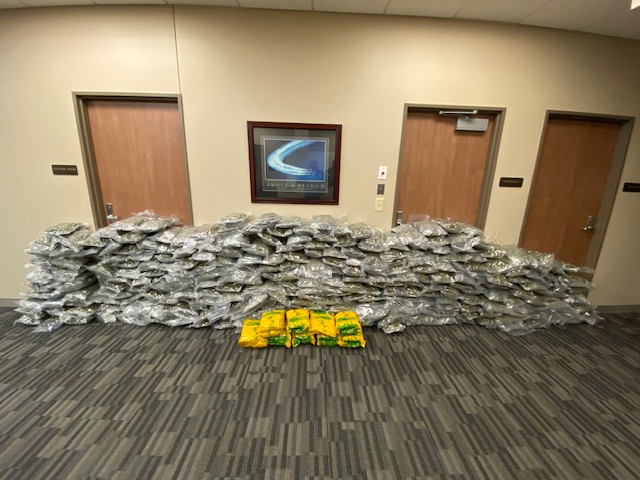 GRETNA, LA – On the morning of November 13, Agents with the Major Crimes Task Force were alerted of a portable storage container containing possible narcotics.

The container was being shipped from California to Shrewsbury Road in Jefferson Parish.

Agents made their way to Shrewsbury, where they located the storage container in question. After having a drug sniffing dog search the outside perimeter of the container,  agents were able to request and obtain a lawful order of search and seizure for the container.

The only person with the combination to the lock on the container was the recipient, so investigators waited on scene for the recipient to arrive.

Around 10:30 A.M. on November 14, 41-year-old Walter Fea arrived on scene to pick up the contents of his storage unit. Once Fea had the storage container unlocked, agents approached and detained him without incident.

After being Mirandized, Walter informed agents that he was hired by an Asian male to travel from Seattle to New Orleans, remove the contents from the portable storage unit and deliver it to a location.

As the investigation progressed Walter was contacted and instructed to bring the van containing the contents of the portable storage unit to a parking lot located in the 4600 block of Lapalco Blvd in Marrero.

Investigators devised a plan to deliver the van to the address listed, without the marijuana. While en route to Marrero, officers learned 53-year-old Charles Angell would be picking up the van and marijuana. Upon his arrival, Angell was arrested without incident.

At the residence, investigators located another 20 pounds of marijuana and packing materials.

MOSCOW (AP) — Russia reported another daily record of confirmed coronavirus cases Monday as a surge in infections has prompted the Kremlin to tell most people to stay away from work starting later this week.

The Russian government's coronavirus task force tallied 37,930 new confirmed cases in 24 hours, the highest number since the start of the pandemic. The task force also reported 1,069 more COVID-19 deaths in the same period, slightly fewer than a record of 1,075 reached over the weekend.

BEIJING — China is urging a dialogue between Sudanese factions as an apparent military coup roils the nation.

Foreign Ministry spokesperson Wang Wenbin said Monday that China wanted all parties in Sudan “to resolve their differences through dialogue so as to maintain peace and stability of the country.”

Biden huddled with the conservative West Virginia Democrat and Senate Majority Leader Chuck Schumer at the president’s Delaware home on Sunday as they work on resolving the disputes between centrists and progressives that have stalled the Democrats’ wide-ranging bill. A person who insisted on anonymity to discuss Manchin’s position told The Associated Press the senator is agreeable to the White House's new approach on the tax proposals.

VIDEO: Trucks blow over on California bridge amid strong storm

What U.S. cities will look like with sea level rise, according to scientific projections