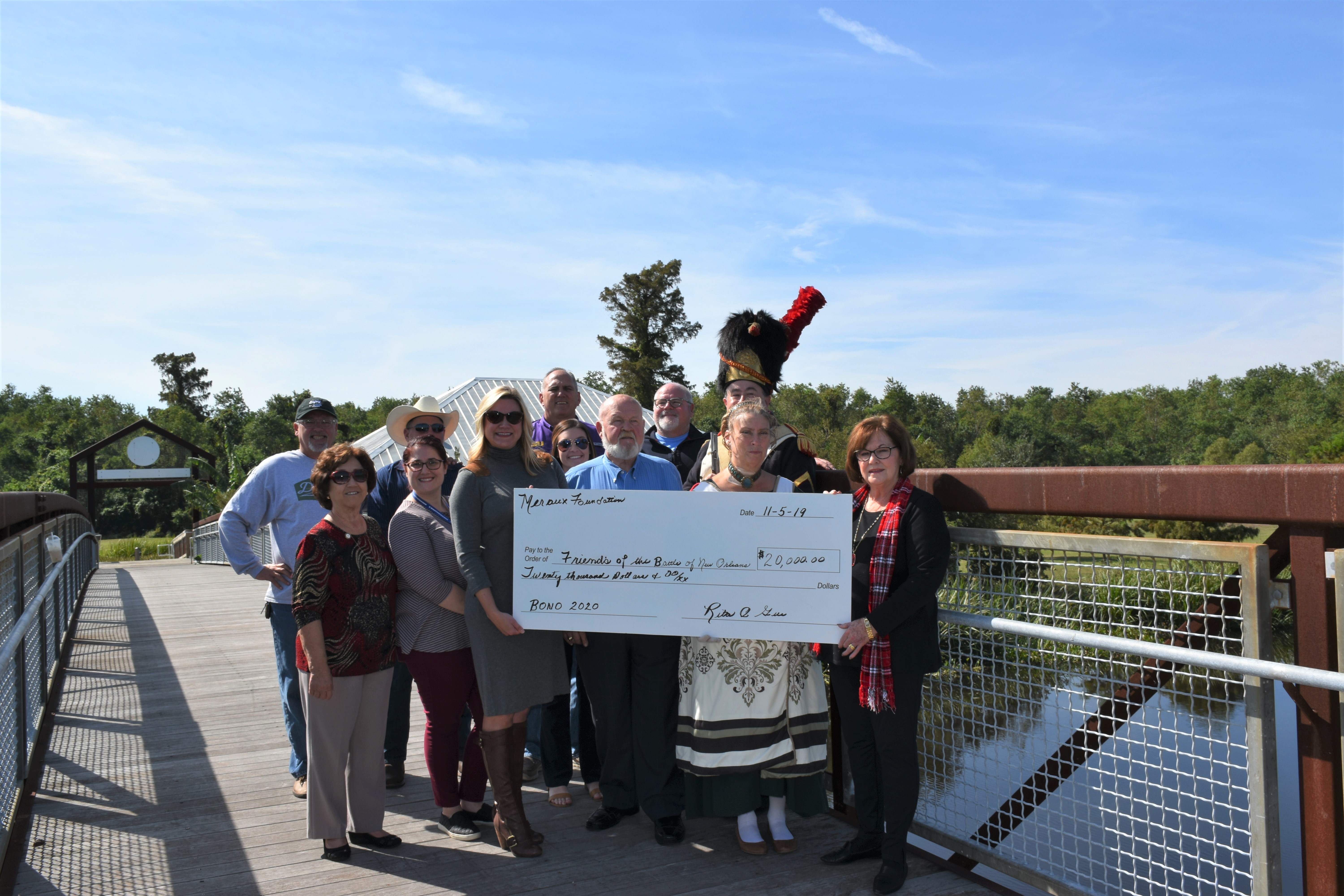 A check presentation ceremony took place at the Forty Arpent Wetlands Observatory in Chalmette, which will serve as the hub of activities for the commemoration.

“The annual commemoration is yet another opportunity for St. Bernard Parish to welcome families from across the region, and quite literally around the world, to experience all our community has to offer,” said Rita Gue, the president of the Meraux Foundation. “We are proud to lend our support to this year’s events, which are sure to entertain, educate, and boost the local economy.”

Friends of the Battle of New Orleans Announce Plans, New Venue for 2020

The Friends of the Battle of New Orleans is working with local businesses, nonprofits, and St. Bernard Parish government to reinvent the activities celebrating the anniversary of the Battle of New Orleans.  This site, located on what would be the north end of the properties where the battle took place, will allow for a larger number of reenactors and living historians to share the story of this great battle.  In addition to military drill demonstrations, live firing of muskets and cannon, and educational opportunities, the new site also allows the opportunity for live fire skirmishes where reenactors simulate battles between American and British troops.  Food and craft vendors will also be on site making this a true community celebration of the historic event.

“St. Bernard Parish is extremely fortunate that the Meraux Foundation has the vision to see that not only will the development of this program make long-term improvements to the community in the form of education and historic preservation, but also have a positive economic impact in the form of visitor and tourist dollars,” said Friends board member, Charlene Strain.  “Many charitable foundations are content to only offer financial support to a project, but because the Meraux Foundation is an integral part of our community, they lend resources that go above and beyond funding, they are a true neighbor and partner and we are indeed grateful for their support.”

Mrs. Strain went on to comment that, “monies donated by the Meraux Foundation will be used to purchase lasting pieces for this year and future reenactments- everything from tenting and educational materials to field pieces such as cannon.  The 40 Arpent Wetlands Observatory site is in the initial phases of a beautifully-planned development including a lagoon and bike path.  This will only allow the reenactment event to expand and grow with it in the next few years.  We are very excited about the future of this event.”

40 Arpent Wetlands Observatory will serve as the site of Battle Reenactments, Demonstrations, and Craft Market

The Meraux Foundation donated the land for the 40 Arpent Wetlands Observatory as the first phase of a nature park as well as land for a bike path that will connect it to the Mississippi River Trail that stretches to the headwaters of the river in Minnesota. The 40 Arpent Wetlands Observatory is near the site of the Battle’s bicentennial commemoration in 2015, which was also made available by the Meraux Foundation.

The 40 Arpent Wetlands Observatory is located at 8201 Benjamin St., near the north end of Jean Lafitte Parkway.  Busing to and from the event will be provided from Arlene Meraux Elementary School at 4004 Paris Road in Chalmette.  Photo by Lenor Duplessis.

METAIRIE, LA - Tensions were high and anxiety was at it's peak, but that did not stop the rescue of a baby American Bald Eagle.

Local photographer P.J. Hahn was going through some of his photos of the eagles when he saw a fishing lure caught on one of the babies chest and the other end was hooked through the babies foot.

Reports show that the African American community seems to have the most coronavirus related deaths.

BATON ROUGE - On Tuesday, Governor John Bel Edwards signed a proclamation related to unemployment and other issues related to the Louisiana Workforce Commission, as it seeks to manage the influx in unemployment claims due to the coronavirus outbreak.

The proclamation addresses various issues related to unemployment and workers’ compensation and also deems health care workers and first responders who work for the state as essential for purposes of the federal Family First Coronavirus Response Act.

Los Angeles has notoriously polluted air. But right now it has some of the cleanest of any major city

Why black Americans are at higher risk for coronavirus

Coronavirus deaths jump in New York, but governor says hospitalizations are plateauing and distancing ‘is working’

Verizon stops in-home internet repairs and installations except for emergencies

Los Angeles has notoriously polluted air. But right now it has some of the cleanest of any major city