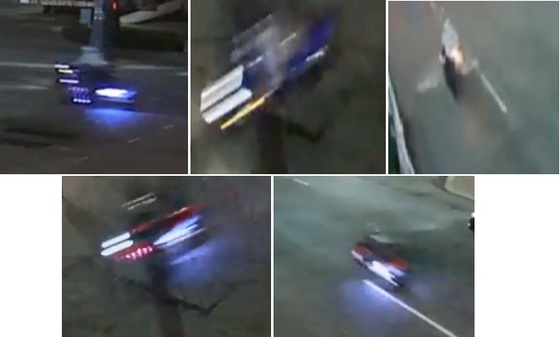 NEW ORLEANS – The NOPD is looking for a motorcyclist who hit and injured a local radio personality over the weekend before fleeing the scene.

Scott “Scoot” Paisant was crossing Canal Street at Bourbon Street just before 1:45 a.m. on February 15 when the collision occurred.

Paisant was struck by a blue motorcycle as it sped by, and he was left lying unconscious in the street after the motorcycle drove away.

The NOPD is also looking for the rider of a red motorcycle that was riding alongside the blue motorcycle at the time of the hit-and-run.

The NOPD has released surveillance images of the incident and the motorcycles involved, but the images are blurred due to the high rate of speed of the motorcycles.

Paisant posted a picture to his Facebook page of himself lying immobilized in a neck brace in a hospital bed with blood splattered down his face from a large gash on his forehead.

Bystanders called 911 and stayed with Paisant until help arrived, according to the post.

Anyone with information on this incident or the identities of the two motorcycle operators is asked to contact NOPD Eighth District detectives at (504) 658-6080.

NEW ORLEANS-- The NOPD is investigating a traffic fatality that happened Monday evening on the eastbound Highrise bridge.

NOPD officers got a call of an accident with injury on the Highrise around 6:30 p.m. When they arrived on the scene, investigators were told that a motorcyclist was traveling eastbound on I-10 when he struck the back of a trailer that was attached to another vehicle, and which time was thrown from the motorcycle. The victim was transported to an area hospital where he later died.