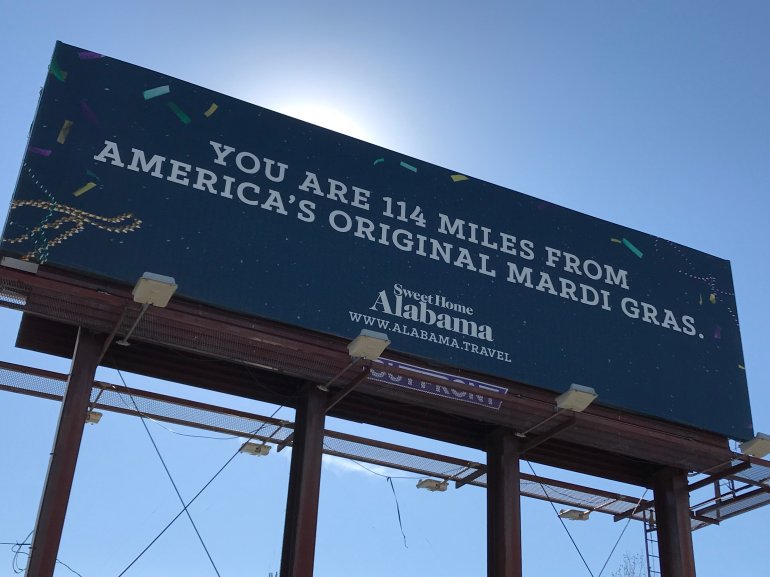 SLIDELL – A billboard paid for by an Alabama tourism group directs travelers to “America’s original Mardi Gras” – in Mobile.

WGNO News With a Twist viewer Brittany Callahan snapped a picture of the billboard along I-10 West in Slidell and posted it to Facebook, where it quickly went viral.

The debate over where and when the first Mardi Gras celebration in the country was held has been raging for decades, with some saying New Orleans, and others claiming the tradition came to the New World 300 years ago in Mobile.

Both cities were founded by Jean Baptiste le Moyne, Sieur de Bienville, who landed south of New Orleans along the coast of the Gulf of Mexico in 1699, before he founded Mobile, and he held the first official celebration of the ancient Christian tradition, according to historians.

Despite the dig, millions of tourists join locals in New Orleans for Mardi Gras every year, dwarfing the annual celebrations in Mobile.

Coach Legette says, “We had some young guys get thrown into the water early so to speak but for the most part I think they did a great job adjusting and we expect them to do bigger and better things this year.”

New Orleans - Food truck owner Eugene Lewis thought it made perfect sense. He would apply for the "business interruption" coverage that's part of his insurance policy.

Lewis had been required to get that coverage in order to get a bank loan when he opened the food truck. Then, when he had to close for two months because of the government coronavirus shutdown in March and April, he was sure he'd qualify for the coverage.

PHILADELPHIA (AP) — Phillies ace Aaron Nola reported to camp on Monday after waiting a few extra days because he was in contact with someone who tested positive for the coronavirus.

The Phillies have had seven players and five staff members test positive for the virus.

What you need to know about bubonic plague, the disease behind ‘Black Death’