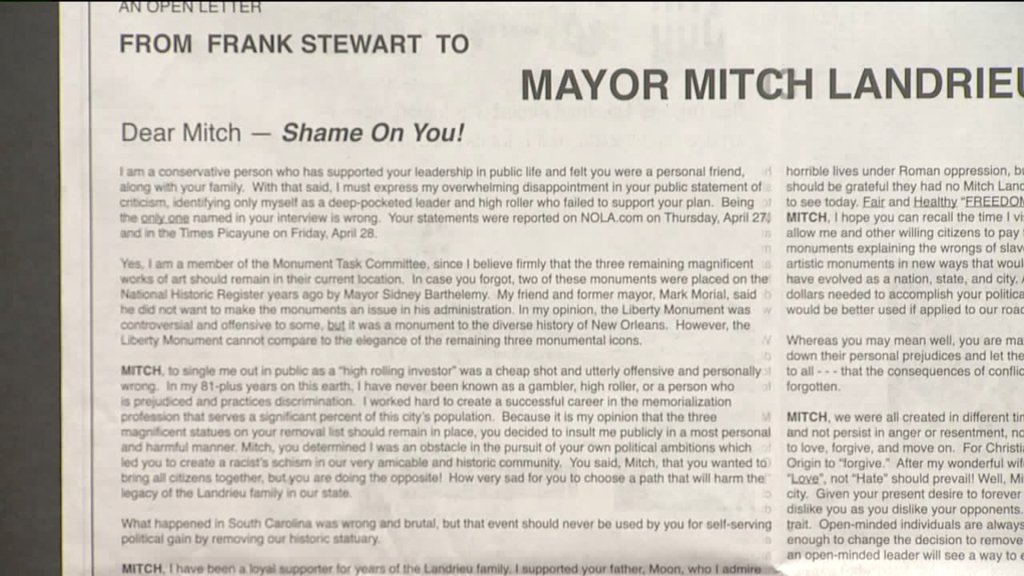 Stewart begins the open letter, titled “Dear Mitch – Shame On You!,” by saying he had until recently considered Landrieu a personal friend.

That all changed, Stewart writes, when NOLA.com reported Landrieu’s comments singling out Stewart on April 27, and the the Times Picayune printed the comments on April 28.

“…I must express my overwhelming disappointment in your public statement of criticism, identifying only myself as a deep-pocketed leader and high roller who failed to support your plan,” Stewart wrote. “Being the only one named in your interview is wrong.”

Stewart took particular umbrage with the use of “high roller” as a descriptor.

“In my 81-plus years on this Earth, I have never been known as a gambler, high roller, or a person who is prejudiced and practices discrimination,” he wrote. “Because it is my opinion that the three magnificent statues on your removal list should remain in place, you decided to insult me publicly in a most personal and harmful manner.”

“Your father earned well-deserved respect for his accomplishments,” Stewart wrote. “As his son, you are destroying the good Landrieu name.”

Stewart, who is a member of the Monument Task Committee, said he believes “the three remaining magnificent works of art should remain in their current location,” especially since they have been placed on the National Historic Register.

“However, the Liberty Monument cannot compare to the elegance of the remaining three monumental icons,” Stewart wrote.

Noting that he is friends with Alden McDonald, whose father in law was “one of our greatest African-American leaders,” Stewart said he has a history of supporting the “association of National Jewish Women.”

The three remaining statues – of Jefferson Davis, P.G.T. Beauregard, and Robert E. Lee – have been standing for more than 100 years, and have not been an issue until recently, Stewart said.

“Mitch, I personally accuse you of having self-serving and very selfish political ambitions to make a public issue out of a matter that our last four African-American mayors never addressed,” Stewart said.

In underlined, all capital letters, Stewart tells Landrieu that the remaining statues “belong to the citizens of New Orleans – not to you!”

“If you remain on your destructive path to take these monuments away, your legacy of public destruction, rather than unity, will be forever memorialized!” Stewart wrote in conclusion, before signing off as “your ‘high-rolling’ – friend?”

When reached, Landrieu’s office said the mayor will get back to us with a response.

Stay tuned to WGNO for more developments on this story.

Donors race to get generators, other aid to hard-hit …

Inside look at how railroads are being repaired in …

Donors race to get generators, other aid to hard-hit …

FBI: Polygamous leader had 20 wives, many of them …

Justices skeptical of elections case that could alter …

Best gifts for every grandpa

One arrested in deadly May shooting