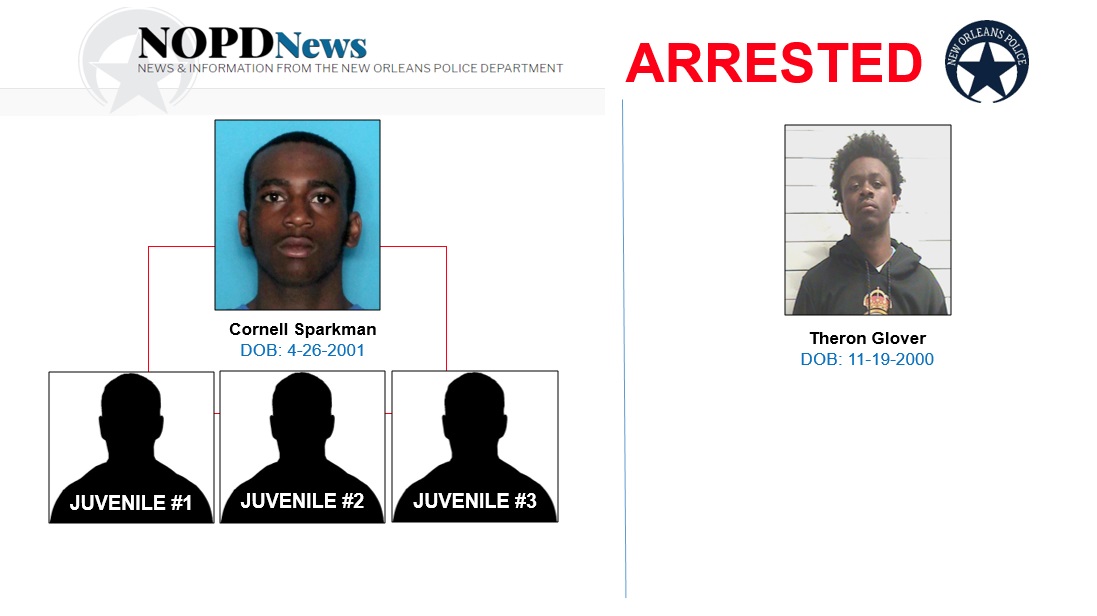 NEW ORLEANS – NOPD Superintendent Shaun Ferguson announced the arrest of five individuals in connection to a string of carjackings.

These individuals are believed to be responsible for a wave of violence and carjackings in several districts around the city.

This string of violent crimes all occurred in a two week period beginning on May 10, stretching through May 23.

The crimes were committed in areas around the city from Uptown to New Orleans East.

These efforts are the result of a collaborative investigation by units from the 1st, 2nd, 3rd, 5th, 6th, and 7th districts.

As a result of a city-wide investigation, on May 23, 18-year-old Cornell Sparkman and a 16-year-old juvenile were apprehended and charged in multiple armed carjackings and shootings.

A second juvenile, was arrested at the same time and charged with one count of armed carjacking.

After further investigation into these incidents, a third juvenile, 15 years old, was apprehended and arrested and faces 6 charges, including four counts of attempted murder.

In addition to this group, 18-year-old Theron Glover was taken into custody by 3rd District officers in connection with over 80 auto burglaries in the 1st and 3rd districts.

After further investigation, 6th District officers were able to identify Glover as the perpetrator of a quadruple shooting that occurred on May 13, 2019 at the intersection of South Saratoga and Fourth streets.

In all, NOPD has connected Glover to a total of 105 charges dating back to February 7th of this year.

“This investigation, leading to these arrests, is a testament to the hard work and dedication of the men and women of the NOPD working around the clock to hold violent and repeat offenders accountable for their criminal actions,” Ferguson said.

NEW ORLEANS - Rex, King of Carnival, is ready to get the merriment of Mardi Gras 2020 underway.

This morning, the Rex Organization issued its annual proclamation to all citizens of and visitors to New Orleans this Carnival season.

NEW ORLEANS - The NOPD is looking for a man who they followed a woman in the Marigny before snatching her bag and running away.

The incident occurred in the 2000 block of Royal Street just before 9:15 p.m. on January 27, according to the NOPD.

New Orleans homicide rate down for third year in a row