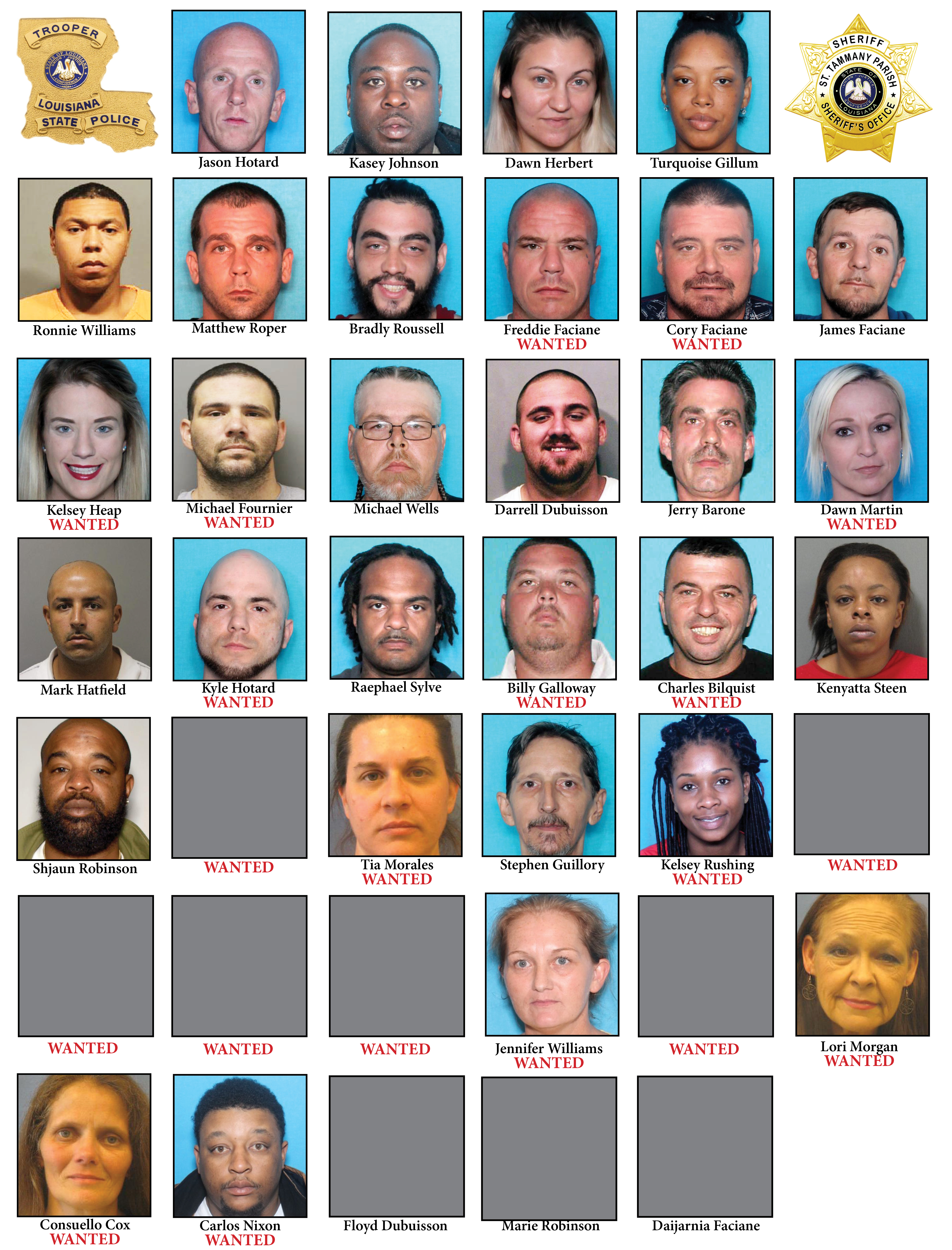 SLIDELL, LA- After a year-long investigation, more than 30 arrest warrants have been issued in connection with a heroin drug operation in Slidell.

Detectives and troopers identified the leaders of the organization as Jason Hotard and Kasey Johnson, along with their girlfriends Dawn Herbert and Turquoise Gillum.

The drug trafficking organization was responsible for the distribution of heroin and other controlled dangerous substances in St. Tammany Parish, Orleans Parish and in south Mississippi.

The investigation resulted in detectives and troopers identifying 32 other individuals as being part of the drug trafficking organization and having participated in the aforementioned criminal activity.

Arrests warrants were issued for all parties known to be involved, and on Wednesday morning, search warrants were executed at 11 different locations, both residences and businesses.

The Mississippi Bureau of Narcotics provided resources and manpower to execute at least one search warrant in southern Mississippi. The Louisiana Department of Corrections – Division of Probation and Parole in addition to The Department of Homeland Security (HSI) also assisted in executing arrest warrants.

Of the 39 suspects involved, 19 are in custody, and detectives are urging the other 20 suspects to turn themselves in.

The organization’s base of operation was identified as Roussell Towing, a Slidell-area towing business. The leaders would use this business to store and package large quantities of heroin and subsequently distribute the heroin throughout St. Tammany Parish, Orleans Parish and south Mississippi.

Through the course of the investigation, detectives and troopers uncovered a second business associated with this drug trafficking organization. That business, Aariel Recovery, was advertised as a substance abuse clinic and is co-owned by Herbert.

“These dealers are selling extremely dangerous illegal drugs in our community,” Sheriff Randy Smith said. “We are continuing our aggressive attack on drug dealers and sending a clear message that this type of criminal activity will not be tolerated.”

Anonymous narcotics tips can be provided on the STPSO website, www.stpso.com, or by calling 1-888-GO-2-JAIL.

NEW ORLEANS— There are a lot of charming businesses in the city of New Orleans. Since 2017, Carlos Detres has sold unique plants to plant enthusiasts. His soul is a creative one and it shows in his cultivation and his art.

"My background is in commercial photography and fine art.  Before the pandemic, that was what I mostly did and selling plants was sort of the side hustle. Now I do this full time," says Carlos Detres.

NEW ORLEANS— It's always good news when one of our city's lost treasures is brought back to life and that's just what's happening with the Dew Drop Inn in Central City.

And while folks that remember the famed establishment are excited, developer Curtis Doucette has his eye on what needs to happen to bring the project to fruition.

NEW ORLEANS-- Living in Louisiana, especially this time of year crawfish boils have become a way of life for us.

Nobody wants to go to a boil where the crawfish seasoning is bland. WGNO's Kenny Lopez spoke with a seasoning scientist with Zatarain's who gives us some valuable boiling tips.

Earth Day was almost called something else entirely

It’s not too late to see the Lyrid meteor shower