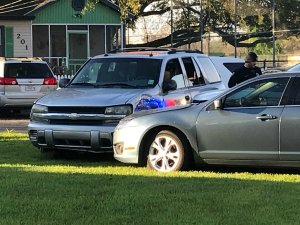 The unidentified driver was reported missing along with her three children around 2 a.m. by her husband, according to the Jefferson Parish Sheriff’s Office.

Deputies located the woman, and a struggled ensued.

The woman bit an deputy before driving off with her children, ages 4, 6, and 13.

Concerned for the safety of the children, deputies did not pursue the woman at that time, according to the JPSO.

The four and six year old children later showed up at a local hospital after a bystander saw the woman kick the children out of her vehicle and drive away.

Around 6 a.m., deputies once again spotted the woman’s silver Chevrolet SUV, and this time, they did pursue her vehicle, according to the JPSO.

The woman hit two police vehicles before turning down a dead end street.

Officers used their vehicles to block the SUV in, bringing the chase to an end on Riverdale Drive.

The 13-year-old was removed from the vehicle safely and the woman was arrested without further incident, according to the JPSO.

No deputies were seriously hurt in either incident.

Watch video of the traffic stop below courtesy of the Jefferson Parish Sheriff’s Office:

Will I need a booster shot of the COVID-19 vaccine?

CHARLESTON, W.Va. (WOWK) — There have been a lot of questions concerning booster shots and a possible third dose for two of the COVID-19 vaccines.

Health professionals are still working to answer those questions, but here’s what they do know.

But Suffolk County prosecutors say Valva and his live-in fiancee, Angela Pollina, were lying about the circumstances of Thomas' distress. They were charged with murder after the medical examiner found Thomas died of hypothermia; the boy was forced to sleep in a freezing garage on a 19-degree-Fahrenheit night.

NEW ORLEANS (WGNO) — 2021 will be a challenging year for the New Orleans Saints.

The Saints play a first place schedule, without their Hall of Fame quarterback, who retired. But, even with Drew Brees, 2021 would not be easy to navigate.

Hurricane Preparedness Week: Get an Insurance Check Up

Early intrigue: Saints open season against Packers, minus Brees and perhaps minus Rodgers

Two teenagers found dead at an abandoned home in Gentilly

Will I need a booster shot of the COVID-19 vaccine?